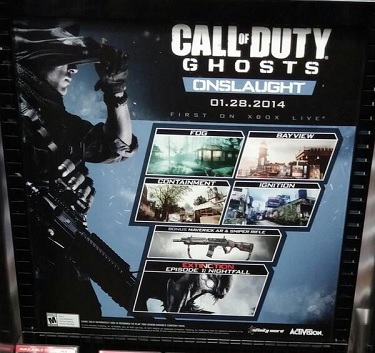 It looks like fans of Activision‘s latest entry in their yearly FPS series will be getting their first set of serious DLC soon. Thanks to a GameStop store putting up their display early, a Twitter user managed to tip off the internet to Call of Duty: Ghosts’ first map pack DLC.

Expect the DLC to drop on January 8th for the Xbox Live Marketplace first, with other platforms getting it at a later unspecified date, and it will feature four multiplayer maps called Fog, Containment, Ignition, and Bayview, an Extinction episode called Nightfall, and a new gun called the Maverick AR & Sniper Rifle.