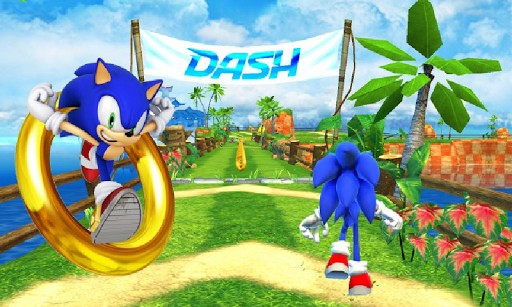 It’s been a long time coming for Sonic fans without an iPhone or iPad, but now the immensely popular endless running game featuring everyone’s favourite blue hedgehog is finally available for Android devices. Sonic Dash allows players to play as Sonic and try to run for as long as possible without hitting an obstacle, falling down a hole or getting hit by an enemy.  Sonic still retains many of the moves he has in his main games including his quick step, homing attack and spin dash, although they have been slightly modified to fit the endless running motif. The game has fantastic, vibrant graphics and features the iconic music of Seaside Hill alongside the sound effects we all know, altogether creating an authentic Sonic experience. Although the game is filled with chances to purchases extra tries and bonuses via microtransactions, it is perfectly playable without buying these items and ads are minimal.

The game has only been out for around a day but has already managed to amass 10,000+ downloads. A special event is running at the moment that allows players to battle Zasz, one of the bosses from Sonic Lost World. Android users can get their fix of some Sonic Dash action from the Google Play store right now, and if your an Apple user who hasn’t played this fun title, now is as good a time as ever to download Sonic Dash from the App Store.