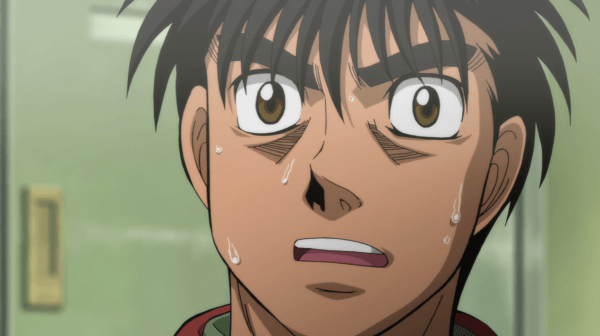 Episode 7 of Hajime No Ippo – Rising was a mixed bag of fun I’d say. This week we returned from Aoki’s big fight and, despite his inevitable loss, he returns to the gym in good spirits and with two followers who were so inspired by his match that they now want to be exactly like him, it is a very humorous and a typical ending to a Hajime No Ippo fight, we’ve seen this throughout the whole series and I can’t imagine NOT seeing this type of humour within it.

We’re met with two big things in this episode; one which I can see being elaborated on in the future and another that seems like it will be the upcoming main attraction of the series but considering these things revolve around both Ippo and Takamura respectively, they could actually go either way, both characters are staples to the series and both characters make for incredibly epic fights that take the viewer by surprise so I’m very much looking forward to that. 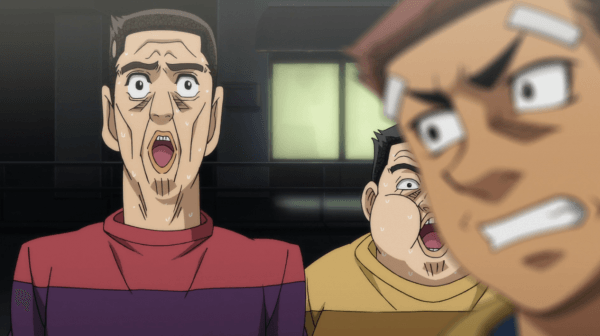 Amongst a great deal of little things here and there we’re met with an incredibly speedy match where, beforehand, Takamura announces that he is done with the Junior Middle Weight class, to which he is the champion of, and intends to gain weight bit by bit while also becoming the champion of each upper weight class along the way. His thirst for the attention of the masses has become overwhelming and it seems like the only way he’ll be able to get his fill is as if he takes the entire boxing world by storm, not just his own weight class.

I loved this scene because, almost in the same sentence, he states that the next match he’s in he will not take even a single hit and that he will decimate his opponent. Once in the match, while using Aoki’s “look away” technique, he IS hit but comes back hard and strong and wins with a knockout. I may look at this in an odd and overly intricate way but I honestly see this as a metaphor for who Takamura is and how his journey will go; he talks big yet he has the ability to back up what he claims even though he’s an A-Grade “doofus”, like I mentioned just above; I’m extremely excited to see his rise and possible fall from grace. 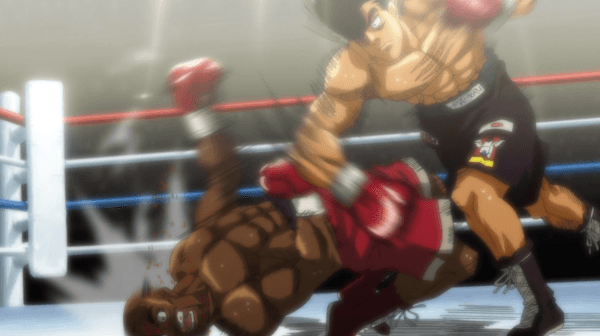 Now onto something that may just blow Takamura’s statement out of the water: Makunoichi Ippo’s next Title Defense match. Early on in the episode at a match of one of Ippo’s friends we’re introduced to a tall and dark man who sports an eerie vibe and almost comes across as some sort of killer, his name is Sawamura Ryuuhei and judging by what we see in the opening sequence you could tell straight away that he was going to be a big part of the story.

Some time goes by and, possibly the next day, Ippo is having a meeting with his coach wherein which he states that though Ippo has defended his title four times it seems as though other fighters are still willing to challenge him. It’s quite odd for a fantastic fighter like Ippo to have so many challenges set against him but the coach thinks it’s because Ippo is a “Cheese Champion”, a term he seems to have made up which basically means, like cheese, Ippo has many holes and a great deal of fighters want to exploit that, fighters like Sawamura Ryuuhei. 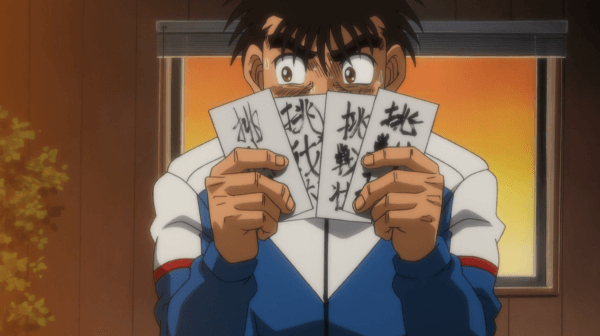 Out of the four challenges that Ippo had received he chose to fight Ryuuhei, at this point in time I’m not sure exactly why, even before he knew who he was Ippo was scared of the man. It seems like Ippo has gone against his guts telling him not to fight and has prepared for a hell that no one thinks he is ready for.He heads home to study some of Ryuuhei’s old fights and once he realizes just how brutal this man is he calls the rest of the gym to help him through the situation.

Sawamura Ryuuhei is a destroyer of men who chooses not to KO an opponent, instead he toys with them as they flail about the ring, he humiliates them and it seems as the though only times he’s ever lost any matches was when he had been disqualified for brutality against other fighters. Shimabukuro who once challenged Ippo lost to Ryuuhei, in fact, it was his only loss in his career apart from the one against Ippo. The man has incredible reflexes and an even better sense of intuition. 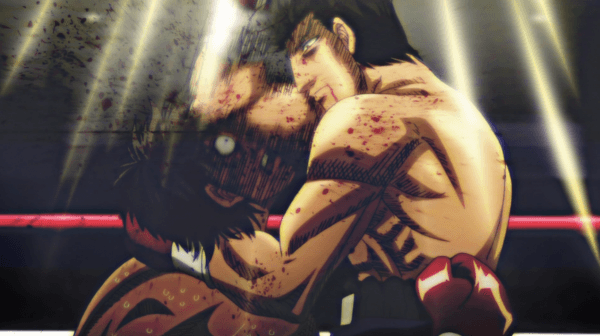 The episode ends with Sawamura Ryuuhei being seen starting a fight with three grown men in a back alley, his only reasoning for fighting them is that they just happened to look weird to him. He cuts up his fist by shoving his hand into the mouth of one of the men showing that he’s not only cruel, he’s a man that enjoys blood and carnage and he’ll do whatever he can to be apart of it. He wishes to crush Ippo, his plan is to do what Shimabukuro could not; destroy the Dempsey Roll, humiliate Ippo and take the title from hime, becoming the champion and decimating Makunoichi Ippo are the two most prominent things on his mind right no and it’s going to make for an absolutely fantastic battle between giants.

I enjoy the fact that Ippo, who is a kind-hearted and all around nice guy, up against these fiends who only want death and destruction. The physical, emotional and metaphorical conflict of Ippo’s fights are amazing to see and it just gives the fights more depth than what you would see in another Anime, that’s what keeps me hooked to the show! Check out more Hajime No Ippo – Rising Impressions HERE.