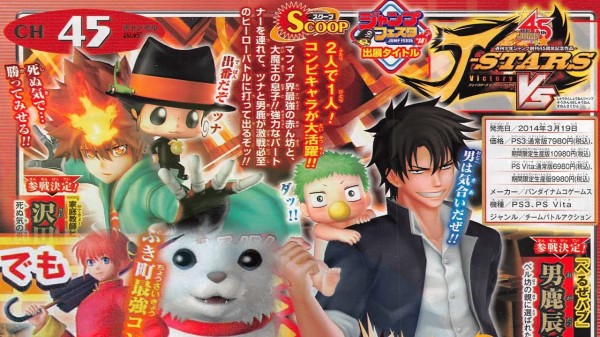 This type of news no longer comes as much of a surprise anymore because it seems as though we’re given more and more information on this highly anticipated game almost weekly, that’s not to say that there is no anticipation that comes with it though, Anime fans from around the world  are so excited for this release and the speculation for who will be entering the fray is at an all-time high, well now you can speculate at a lower frequency because three new characters have just been announced for the PlayStation 3 and PlayStation Vita brawler: Tsunayoshi Sawada and Reborn of the series Katekyo Hitman Reborn, Tatsumi Oga and Beelzebub from the series Beelzebub and Kagura and Sadaharu from Gintama have all been added as battlers and they are looking fantastic in HD! 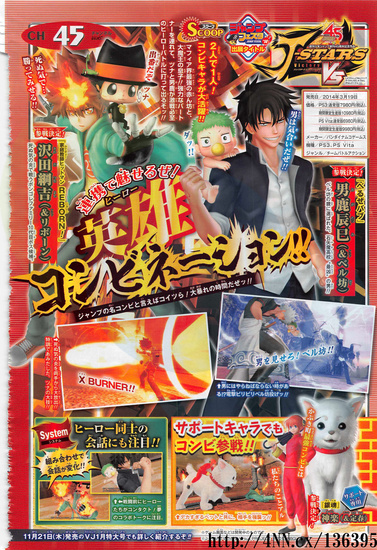 Tsunayoshi Sawada and Tatsumi Oga will both serve as Playable Characters alongside their baby counterparts. Tsuna and Reborn will come together to attack using the X Burn, a devestating attack which, if you’ve seen the Anime or read the Manga you’d know, is a giant blast of pure energy and Tsuna’s signature move that he has developed over the “Reborn!” series.Oga, on the other hand, uses a grumpy and electrified Beelzebub and lobs him at his enemies. Kagura will partner up with Sadaharu and will be used only as a Support Character, she will ride out onto the screen on Sadaharu and bowl down any enemies that get in her way. J-Stars Victory Vs is set for a release in Japan on the 19th of March 2014 which still is a fair while away but stay tuned for more news to be released in the coming months.