Titan Comics is going to kick it off in a huge way this year at the New York Comic Con with the release of brand-new comics, brand-new collections, crazy panels and awesome guest signings! Advanced copies of comics like “Miranda The She-Wolf” by Chris Claremont, famous for The Uncanny X-Men, and John Bolton who is famous for Man-Bat as well as others, will be available to the public! Monty Nero and Mike Downling’s “Death Sentence” will also make it’s début which is going to be a fantastic comic for crowds to get their hands on. On the Saturday of the Con, Jim Steranko will join Dave Elliot at the Titan Comics booth for an exclusive signing. He will be signing 300 A1 Annual prints with the money going to the “Heroes Initiative”. Si Spurrier will also be at the Titan Comics booth to sign his fantastic, smash-hit comic “Numbercruncher”. 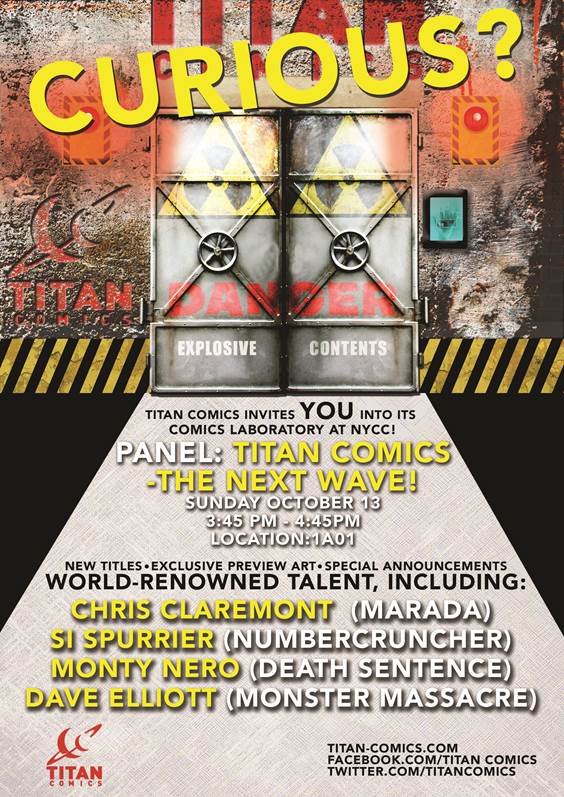 On the Sunday of the Con from 3:45pm to 4:45pm, Titan Comics Senior Editor Steve White will be holding a panel with Si Spurrier, Dave Elliott and Monty Nero. Audiences will get a taste of what it is like behind the scenes of comic book creation and will be hearing about some cool announcements from the creators of comics themselves. Now that was just a little bit of an overview but if you are going to NYCC this year I suggest you look at the list below this paragraph to see all the Titan Comics events and activities. For any and all other information on the event or on Titan Comics themselves remember to follow them on Facebook (Here) where updates about what is going on will be frequent so you can always stay on top.