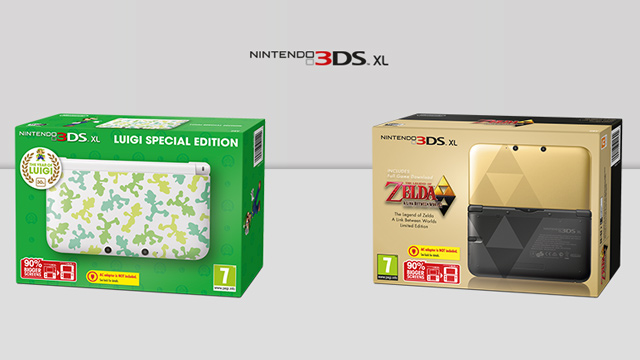 Nintendo loves to release their consoles in a variety of colours and limited editions and the 3DS has been no exception. We’ve seen Pokemon themes, Animal Crossing themes and now, a previously exclusive to Japan Luigi themed 3DS XL is joining the group as well as another Legend of Zelda edition based on the newest title A Link Between Worlds.

The Luigi themed console is white with Luigi silhouettes plastered all over the cover in different shades of green. The console nicely caps off the Year of Luigi which Nintendo has been celebrating this year. The console will cost £179.99 and is available from November 1. The Zelda themed console comes with a download code for the new game The Legend of Zelda: A Link Between Worlds. The console is gold on top and black on to the bottom and when opened, the forms the game’s logo of the two Triforce’s. In releated news, the retail version of the game will come with a reversible cover allowing players to choose between the all gold cover or a full colour depiction. A Link Between Worlds releases on November 22nd with the limited edition console releasing on the same day at a price of £199.99.

The bad news is these consoles have only been confirmed for a release in Europe so far. Check out the gallery below for pictures of the new consoles and the reversible cover. Has this tempted you to buy a 3DS or maybe even add another to your collection? Let us know in the comments below.