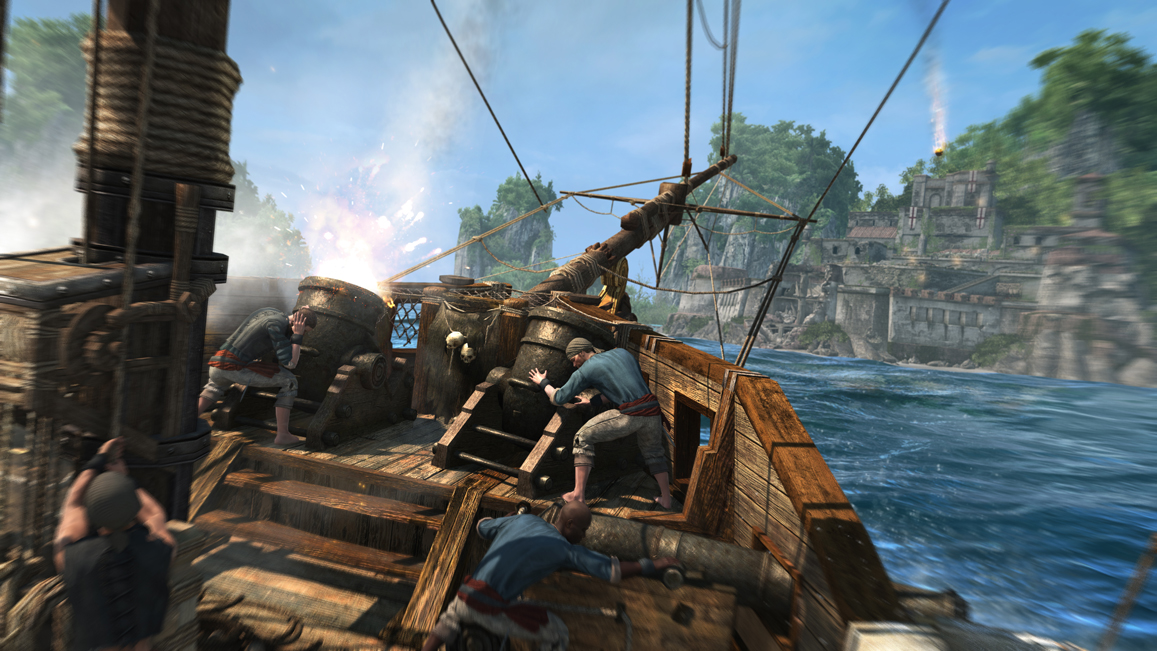 Many of you may have seen the Naval & Fort demo from Assassin’s Creed IV: Black Flag that was shown at Gamescom back in August. Well, at EB Games Expo 2013, we were able to actually play the demo, and on the PlayStation 4 no less!

The demo begins with the cutscene between Captain Edward Kenway and his first mate Adewale, where they discuss their place in the world. They fight for the Jackdaw – their “country” – and desire the riches of one Governor Torres of Cuba. Firstly, being on the PlayStation 4, it looked fantastic, and the fact that I was holding the new Dualshock 4 didn’t even enter my mind… I’ve played more than a few titles with the controller now and it already feels natural. And after needing to use the triggers for shooting and running, it’s worth noting that they work splendidly – the one aspect of the Dualshock 3 that I had any major gripes with. 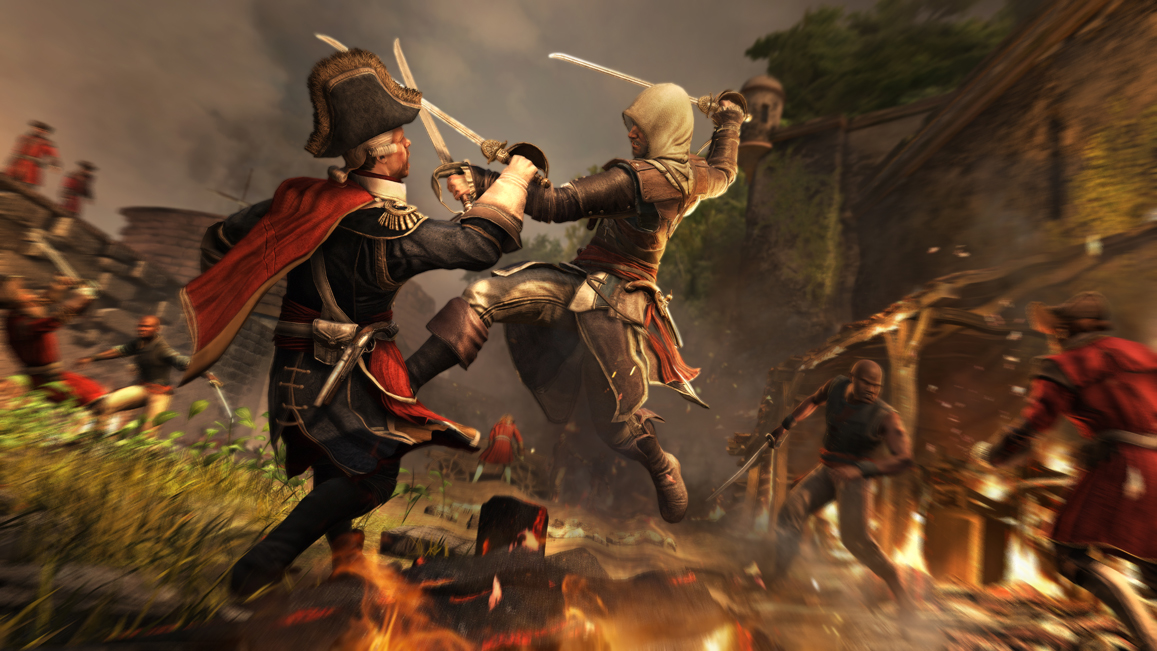 As gameplay begins, the objective becomes clear: destroy the fort defences. Our first experience with the naval mechanics is both familiar and foreign. As in Assassin’s Creed III, bracing and changing speeds by setting the sails return as key interactions, but there’s also a bit of new here. As we advance closer to the fort, a couple enemy ships come into sight. We brace as the red cone of light warns of an attack, and fire back. Using the left trigger to aim, we observe the newly represented cannon guides that project as you aim. They arc and show the specific point/angle of impact, also giving a more accurate sense of distance.

After shooting and damaging the enemy schooner with our cannons, we utilise the swivel guns to further dismantle the ship. The implementation of the weapon seems to have changed in Black Flag; not able to be used simply after waiting out a timer, the swivel gun is only effective once a ‘triangle’ prompt displays, acting as targets. Once these are visible, you can finally hold down the button to aim the shot. In the demo, they only seemed to appear after already doing substantial damage to the opposition. So it is apparent that the designers do not want you to be able to spam the use of the swivel gun for an easy battle and a quick victory, which I actually appreciated. 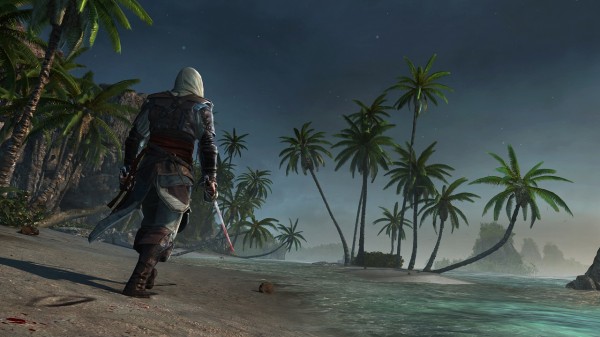 Seamlessly, looking back will automatically select the explosive barrels carried on the Jackdaw. So when you press the trigger to fire, you instead release them and can then blow them up by shooting them with the swivel guns (or, of course, time their release well and they’ll hit an enemy, exploding on impact). We sink the first and look to do the same to the larger brig, but find ourselves with the opportunity to board it instead. We initiate the boarding with the press of a button after sailing besides it. It’s not like parking a car in a tight spot – you don’t need precision. Once the prompt appears and you follow it, the ship automatically docks next to the helpless opposition.

You then have the option of jumping over and finishing the fight hand-to-hand, or softening the foes even further with some swivel gun shots. When they surrender, you can adopt the crew or use its resources to repair your ship. Turning our attention solely to the fort defences, we attempt to avoid falling into the line of sight for their mortar attacks – the range of which are signified by yellow cones of light to clarify the difference between them and regular ship attacks – while blasting away. Once they have been destroyed, we smoothly leap int the ocean, swim to shore and begin our assault on the commander of the fort and his forces. As the chaos ensues, Edward flips on his hoodie and we race through the battle to reach the commander in question. 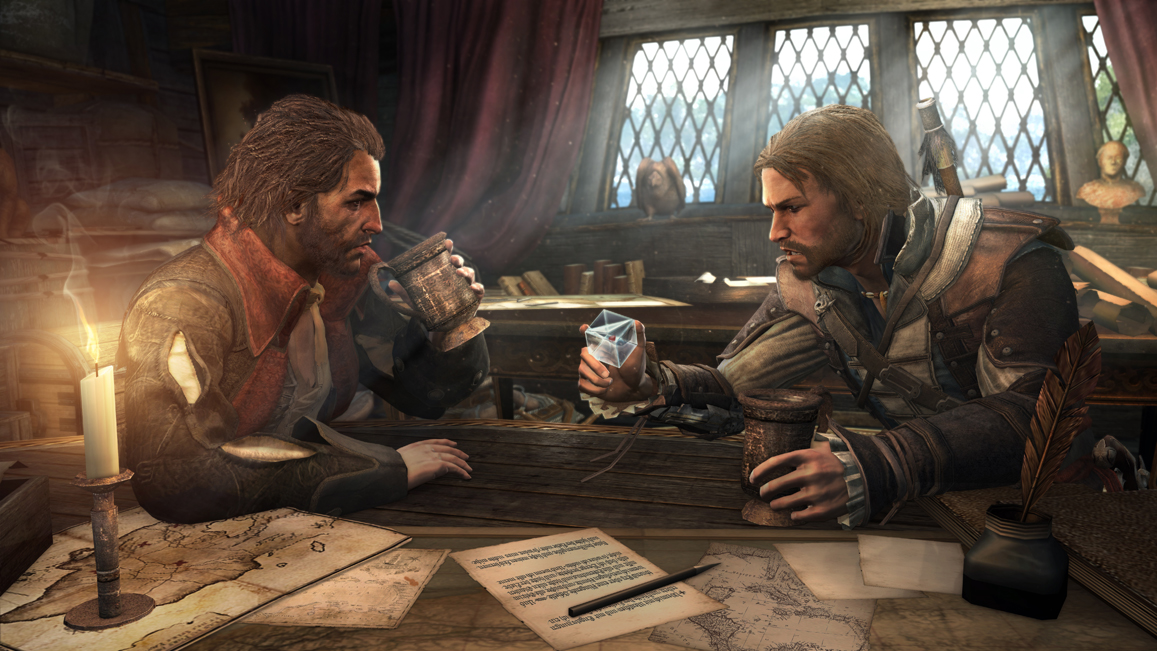 Only truly forced to confront one soldier in the process, we quickly blow past him, effortlessly shooting others in the vicinity with the dual pistols functionality, which is easily achieved – almost with a semi-auto aim. Coming face to face with the commander, we brutally cut him down with our cutlass. The basics of hand-to-hand controls are largely untouched, but then again, we didn’t have much of an opportunity to try out Edward’s whole arsenal and link it together with the above-mentioned dual pistols. With the ultimate objective completed, we enter the war room, engaging a closing cutscene.

The demo may have been brief, but it was an especially effective slice of the naval combat. Having wanted a good pirate game for such a long time – and being a fan of the franchise – I can hardly wait until Assassin’s Creed IV: Black Flag releases for the Xbox 360, PlayStation 3 and Wii U on October 31st; the Xbox One and PC on November 22nd, and the PlayStation 4 on November 29th, Australia-wide. You may also want to read our interview with Game Director Ashraf Ismail and Senior Game Designer Michael Hampton. 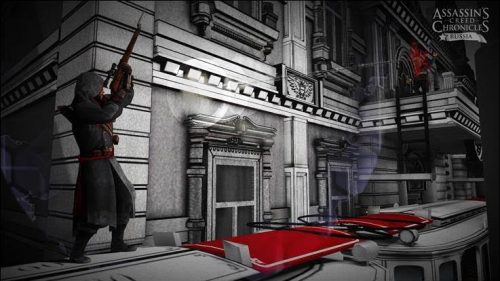