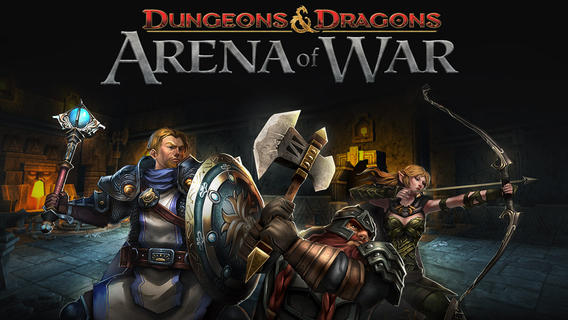 DeNA and Wizards of the Coast have announced that Arena of War, the first ever free-to-play Dungeons & Dragons mobile game, is now available exclusively for iPod Touch/iPhone/iPad.

Arena of War is a turn-based, 3D, battle-RPG mobile game that sends players on perilous quests through the Forgotten Realms. As a proven fearless champion, the player is called upon to fight for the gods of good during the Sundering, a historic event in the Realms that will reshape both heaven and earth and shift the balance of good and evil.

The gang’s all here

“Arena of War is an epic and imaginative experience and we could not be more honoured to be partnering with Wizards of the Coast and Hasbro to launch the first ever free-to-play mobile Dungeons & Dragons game. Our development team worked side-by-side with Wizards of the Coast to build a game both long-time fans of the leading RPG franchise and action-adventure game players new to the brand will enjoy playing.”

Players build an adventuring party to enlist on their quests in Arena of War. By inviting friends to join a questing party, players can vanquish enemies and take on tougher challenges and bosses together. Each quest provides heroes with a variety of challenges for which some players, depending on character class, will have an advantage. The arena itself is also dynamic, filled with deadly traps that can be used against a player’s enemy or result in their own demise.

“Wizards is committed to working with the best partners to bring great digital D&D experiences to our fans, Arena of War creates a great mobile experience in the Forgotten Realms and pits players against our legendary monsters to fight for the Realms in the current Sundering storyline.”

Arena of War is available now for free on the App Store, with an Android release coming soon. Players receive an alert when the game is available for Android as well as upgrade their character by obtaining the free Ultra Rare Power CAUSE FEAR by visiting the official site. Check out the screenshots below and prepare for some dungeons and maybe a dragon or two.