Get ready to shell out a few more influence Points; Riot Games, the masterminds behind League of Legends have announced the next addition to their impressive set of playable champions. Meet Ao Shin.

In Riot’s “Champion Sneak Peek” they mentioned that Ao Shin is a powerful storm dragon and guardian of the natural world. Legend holds that when Ionia faces its greatest crisis, Ao Shin will descend from the sky. But this isn’t the first time we’ve seen Ao Shin as he made a cameo in Spirit Guard Udyr, an animated and interactive comic based within the realm of League. 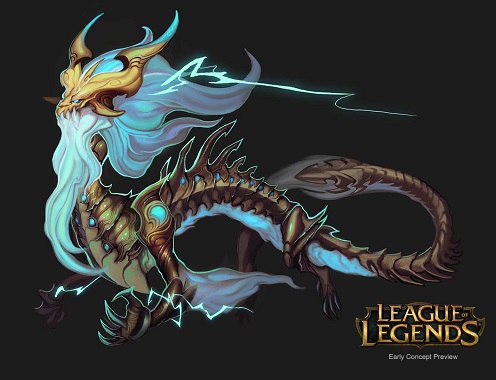 Check out more of the sneak peek:

Let’s start with the inspiration for his name: Ao is the family name of the mythological dragon kings, who rule water and weather. This tells us right away that this is a powerful, elegant being, above the concerns and rules of men. Shin can mean many things, one of which is prosperity. It also means a rising storm. Ao Shin embodies this elemental duality, capable of raining good fortune on his allies and, in the very next breath, bringing stormy, thunderous ruin upon his foes.

The community’s been asking for a dragon champion for some time, but we knew we couldn’t just do any dragon. With each new champ, we try and push the limits of what’s technically and creatively possible. Ao Shin is no different. One of the challenges we’re looking forward to tackling is how to capture his unique anatomy and movement in a way that brings a new dimension to the champion pool. It’s too early to go into much detail, but we’re really excited about the ways this champion will move across the battlefield.

Ao Shin isn’t the next champion scheduled to come out, so he’s still a ways off, but it’s still exciting news. Like Riot states “Hopefully you’re as excited about his potential as we are to keep working on him!”

League of Legends is available, free, for download on the PC and Mac.