It slightly underperformed at the Australian box office, but over-performed worldwide

Apparently, images of your country being destroyed by a zombie threat is appealing after all, as World War Z has just passed the $500 million mark in worldwide box office earnings.

World War Z has, in the process, become Brad Pitt’s highest grossing film in his storied career, surpassing Troy‘s total of $497.3 million globally. Here is the official breakdown from Paramount:

After setting a personal best with a $66 million opening on June 21, World War Z has gone on to total $197.4 million in the U.S.  The film delivered Pitt’s highest grossing domestic release of all time (besting Mr. and Mrs. Smith’s total domestic gross of $186.3 million), and the biggest opening weekend of his career (beating Smith’s $50.3 million opener). The film has earned $305.2 million at the international box office, to date.

We, having enjoyed the film – with it exceeding our expectations – are glad to hear that it has yielded a profit after troubled waters with its complete re-write and mammoth marketing campaign (which can sometimes cost more than a movie’s actual production!) Could we have a sequel in our future? Let us know if you would be down for that in the comment section below. 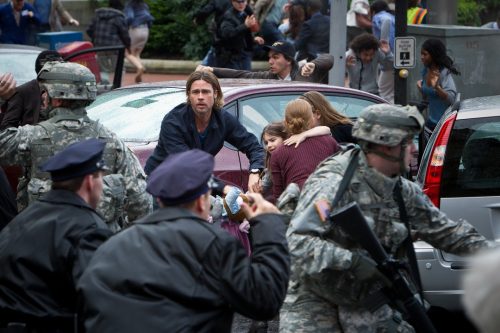