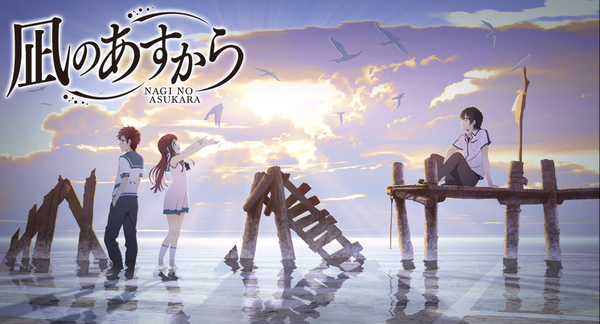 I think it is fair to say that since the release of Another in early 2012, nothing that P.A. Works has produced has been particularly memorable. RDG Red Data Girl was so slow to get into that it was almost painful to watch and having to say this about quite possibly the most beautiful animation company in Japan is a shame. P.A. Works production values are second to none it seems and everything from backgrounds, to character designs, to even the smallest details in a room have the greatest care given to them. That is why I still believe that there is promise in every series that they produce and Nagi no Asukara is no exception.

Little is known about the actual story of this series, but what we know so far is that it revolves around two children that live by the sea: a girl who tends to cry a lot called Manaka Mukaido and her caring childhood friend, Hikari Sakishima. What we can derive from the PV is that there will be a magical element to the story, but aside from that they are really not showing their cards yet.

Leading the voice cast is the hugely talented Kana Hanazawa who will be voicing Manaka. Hikari will be voiced by Natsuki Hanae who made his real breakthrough in 2013 with the series Dansai Bunri no Crime Edge (The Severing Crime Edge) where he voiced the main character Kiri Haimura.

Nagi no Asukara is set to release this fall and a manga adaptation began serialization in the June 2013 issue of Dengeki Daioh. For news of other fall releases and everything else you need to know anime world, check out our Anime News section!