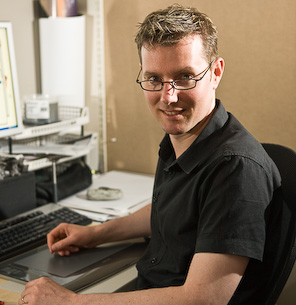 Weta Workshop and their SFX division Weta Digital are basically the kings (and queens) of props and practical/special effects in film and TV. Based out of Miramar, New Zealand, the company became a household name after their amazing work on The Lord of the Rings: the Fellowship of the Ring back in 2001. They have since also become synonymous with director Peter Jackson, working on numerous of his other projects thereafter.

At this year’s Supanova Pop Culture Expo, designer Daniel Falconer – who joined Weta Workshop in 1996 – held a presentation looking at the history of the company in the business, and exploring the processes of some of their most recognisable works. It was great to attend for anyone interested in the field or movie-making in general. Here is a rundown of what was covered, including some quotes (partially paraphrased) to help convey what is better translated through visual language.

I apologise in advance for not being able to capture good shots of the powerpoint slides, but I have included some examples of Falconer’s work. At the outset, Falconer gave us all a digital tour of Weta’s fine work; mostly films that we will all recognise: The LOTR Trilogy, The Last Samurai, Master and Commander: The Far Side of the World, The Legend of Zorro, King Kong and many more, before explaining how a gig is typically landed for the team and other SFX houses; 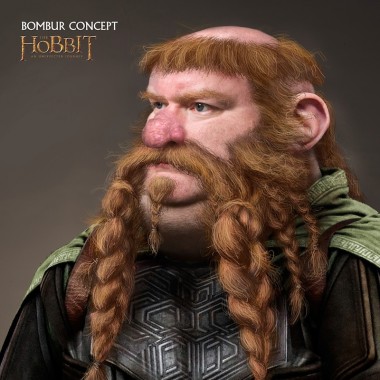 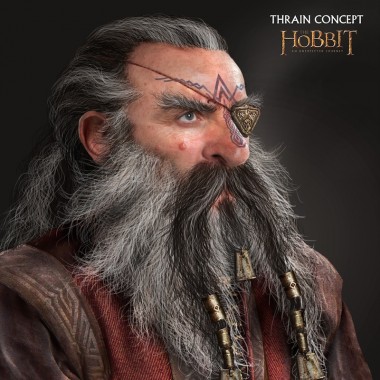 Then, he got into specifics on certain projects and set pieces – of which one in particular may interest our fellow gamers out there. You’ll know it when you read it;

On The Legend of Zorro: The biggest part of principle work was building the train. We built a 1:4 scale steam train and placed a V4 engine inside it. […] We had one take and filmed with four different cameras as it blew up.

On the Halo movie: I worked for over a year designing on a Halo movie that in the end got canned. It was a real shame as it was shaping up to be an amazing film, and I’m sure it will be made some day. On the back of the movie falling over, we were able to provide the weapons, armor and warthog for a bunch of short films made for the games that you may have seen.

On Avatar: By the time we were brought on, the Na’vi themselves had already been designed, as were the bulk of the environments. […] But we did all the Earth forces; they wanted us to design all the weapons, the body armour the guys wore and tech – including all the amazing big tanks that the Avatars would roll inside, which we actually made full size.

Daniel also recalled his time walking around the set of the film;

I got to walk around in the Op Centre and while some of the digital displays are holographic (those were all in CGI) they did have a lot of big glass screens with stuff projected on them and you really felt like you were walkin the bridge of the Enterprise or something like that. That set was incredible.

Daniel then touched upon the critically acclaimed District 9 – an instant cult classic. Apparently, the original plan for the “Prawns” was much more labor intensive;

We were gonna do the prawns as physical suits but in the end they ended up going digital, which was probably for the better, but we built all the physical suits for them as well. I think the only part of the movie where they used the physical suits in were those really dodgy shots on the magazine covers of Wikus in compromising positions with prawns. 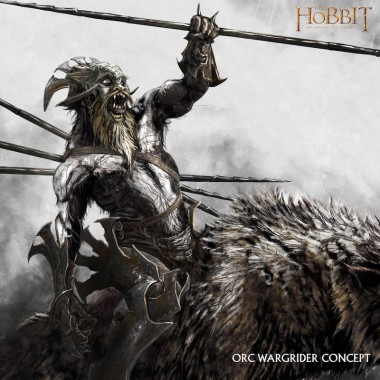 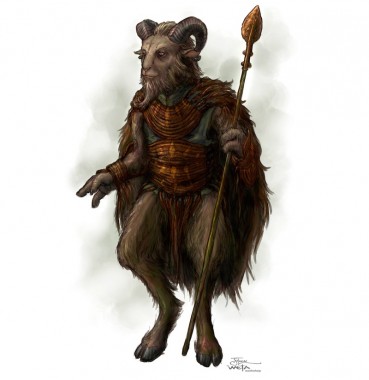 He also spoke about the crew’s workaround to using real chainmail for The Lord of the Rings trilogy;

We pioneered a technique on LOTR to make lightweight plastic chainmail so that the actors wouldn’t be wearing 50kgs of metal as it would be impossible to act in. So we created the lightweight plastic chainmail using a long pipes and we had a machine that would slice it really thin and then we had two guys sit down in a room and put together the rings one by one by one…they were slightly mad when they started, and slightly more mad when they finished. But, they had no fingerprints left so they could’ve gone off to a life of crime and never get caught.

The seminar as we should call it was not all business as Daniel shared a funny story with us;

Stu was one of our armor makers – absolutely nuts! I think it helps to be slightly nuts to work at places like Weta because you have to be very, very intense about your work […] I still remember one weekend, Stu was off to a re-enactment one time and he was just picking up his armor from work and he’s got this beautiful big ol’ black vintage car that he drives around…and I see him walking down the street in full platemail armor – helmet and everything – loading stuff into his car. He jumps in the car, closes the door, down goes his helmet and off he went. I thought, holy crap man you better not get pulled over by a cop!

A colleague of his even wore his armor on a flight (only one hour long) because he couldn’t add any more weight to his luggage or another bag, in pre-9/11 days of course.

Peter Lyon is a sell-taught sword-maker. He had a desk job originally and h wold go jousting on the weekends and attend re-enactments with his friends. And he started making his own swords for that purpose […] More and more, he was doing these things for commission until eventually it became such a big business for him that he quit his day-job and just became a professional sword-maker! […] But we hired him and brought him down to New Zealand and he now makes swords for us for a living. The swords that he made for LOTR are truly exquisite items and they are now exhibited in the Leeds armory in the UK and I’ve been told that he’s the only living swordsman who has his work on display there. 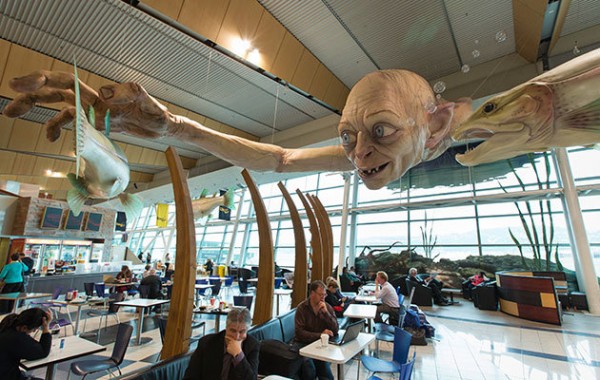 Gollum in the Main Eatery of Wellington Airport

The final piece of in-depth production information naturally focused on The Hobbit. The crew had learnt a lot from their past experiences on the epic LOTR Trilogy, and adapted with new techniques to make things easier, smoother and more convenient;

For LOTR we had to make hobbit feet; each could only be used once and sometimes we would go through two pair a day – you can imagine how many of those we had to make. They were basically like slippers; you’d put your foot into them and they’d glue around the ankle and the top of the foot and then the hair was put on and that kind of helped hide the seams…but that was very labour intensive. […] For the Hobbit we pioneered another new technique whereby the feet were actually more like gumboots in that you pull them all the way up and they secure up above the knee and they’re really tight so they hold themselves on; we didn’t need to use any glue, so they were reusable and there was no edge that had to be blended.

Daniel wrapped up the seminar by showcasing Weta’s work outside of the usual medium – they even built a large animatronic dragon for a nightclub! – and playing a pretty comprehensive showreel. Other than the obvious talent and hard work that goes into creating these masterpieces, I also took away from the seminar something I should’ve already grasped – just how big LOTR is in New Zealand! I mean, that giant Gollum in Wellington Airport is insane! I want to stop over there just to see it live!