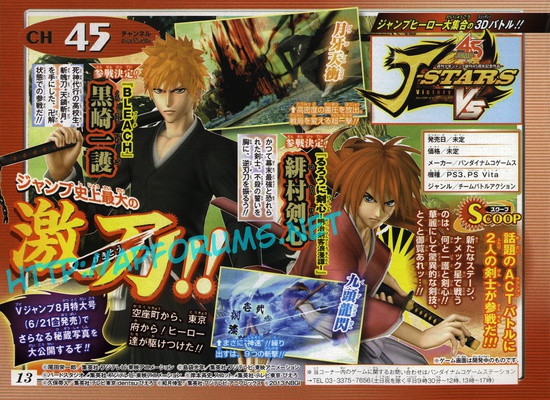 Both Redheads, both samurai, both added to the Shonen Jump line-up.

The last thing we heard about J-Stars Victory Vs was that Naruto was added to the line-up for this “Jump Ultimate Stars-esq“, PS3/PS Vita, fighter, well now we can say for sure that two more characters have been added; Ichigo Kurosaki from the series Bleach and Kenshin Himura from the series Rurouni Kenshin. It is really no surprise that these two guys were added. Shonen Jump knows what it’s doing when it comes to mix-em-up fighting games so I think they’re just leaving us in some elongated suspense as they slowly, slowly give us little chestnuts of information.

So the line-up so far is: Goku from Dragon Ball, Toriko from Toriko, Monkey D. Luffy from One Piece, Naruto Uzumaki from Naruto, Ichigo Kurosaki from Bleach and Kenshin Himura from Rurouni Kenshin. It’s not a bad roster but it’s still early days and I can see so many more characters added. I’m hoping that this “Ultimate Jump Game” is like a next generation version of Jump Ultimate/Super Stars and I think a lot of people will agree with me.

Namco Bandai will be launching this game for the PS3 and the PS Vita, we’re not sure exactly when and considering the lack of info on it I doubt it’ll be for a while but keep your eyes on the site for more updates on this as they come through and don’t forget to hit up our comments section to tell us what you think or to speculate in general. 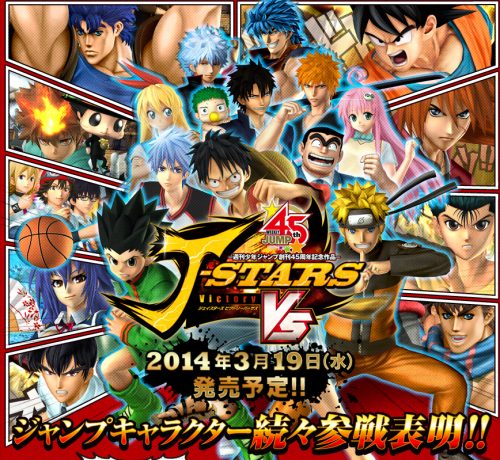