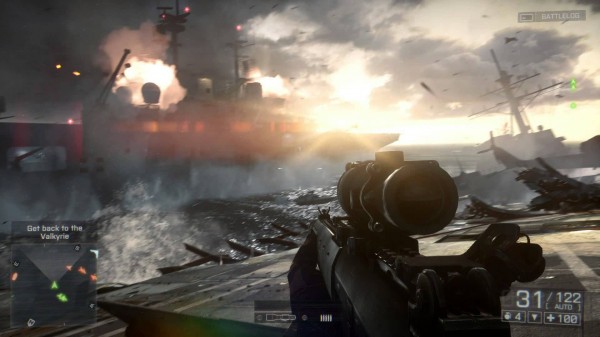 After a few audio difficulties, DICE revealed a single-player mission from the upcoming FPS Battlefield 4 during the Microsoft E3 2013 press conference. Titled “Angry Sea”,  the mission has Recker and his squad aboard an aircraft carrier called “Titan” and are under heavy fire. After a daring escape, Recker jumps into an enemy ship to demonstrate some of Battlefield 4’s vehicle combat. Powered by the Frostbite 3 engine,  graphics are looking impressive and action is intense. This demo is showing much promise for the single-player campaign and hopefully more information will be revealed soon. Battlefield 4 will hit stores in November on Xbox One, PlayStation 4, Xbox 360 and PlayStation 3.

Make sure you check out the gameplay video below!

Battlefield Hardline to be released in March 2015

Need for Speed: The Run releasing to stores on November 15th