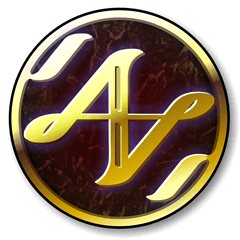 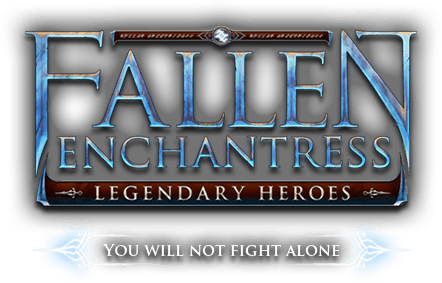 Overview
Strategy games come in all sorts of sizes which provides a slight difficulty in categorizing the genre. Fallen Enchantress: Legendary Heroes, however, preaches the 4X’s category holding on to the fundamentals to explore, expand, exploit, and most importantly exterminate. With this clear distinction, the title sets itself apart from active strategy games and relates better with role playing and turn-based mechanics. Naming Fallen Enchantress: Legendary Heroes the “spiritual successor to Masters of Magic“, Stardock Entertainment has some nostalgia to live up to. Let’s see how they are doing.

Story
In the beta, you do not experience a specific storyline geared towards your individual mission. Opening credits and a brief mentioning of your clan at the mission start are the immediate story pieces you experience – not much exposure. What is known is that the world has become under siege by great powers causing cataclysmic events. Champions soon rise from every kingdom to tame the wild magics or intertwine in the chaos. However, you are geared towards forging your own story by decisions throughout missions – creating a new experience each time you play. Here’s the stinker: Characters cannot be re-used after completed missions. The original creation of a character can be utilized for missions, but an advanced character from a previous mission cannot continue forth. 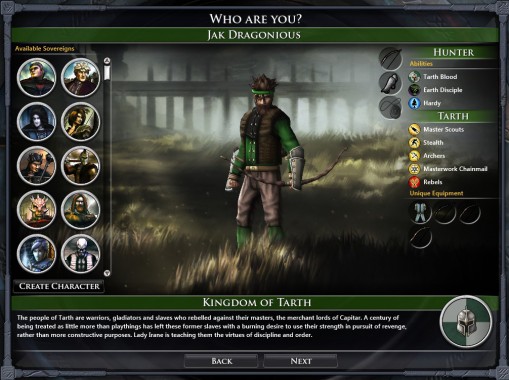 Though there isn’t a “campaign” driven by guiding plots, Fallen Enchantress: Legendary Heroes does have an inactive button called Scenarios. You can probably bet that this will contain plot driven missions with specific guidelines to master. Speculation leads me to believe that each kingdom will have a major role to play in aftermath of the cataclysm.

Gameplay
Stardock Entertainment did well to create a thorough environment for players to enjoy over and over again. Gameplay is far from simple by incorporating town revenue, stores, research, quests, monsters, and other kingdoms. Fallen Enchantress: Legendary Heroes mixes and batters all of these ingredients then quickly delivers it all to your awaiting taste buds. Granted a tutorial is set in place for those unused to the 4X strategy genre, and it does a fairly decent job setting new players in the right direction. Being no expert myself, I gained plenty of knowledge of managing a town from the tutorial to use in my first mission.

Character creation or manipulation is potentially the most crucial part of the gameplay process. This is the defining moment in the game where you get to pick how you want your character to look and how you distribute his/her attributes. Do you want to have multiple magic powers, or would you be willing to sacrifice a power for an enhanced item? Perhaps you would be willing to take on a negative attribute to add a point somewhere else? Plenty of options are available for your disposal, and it is your story that is being made. 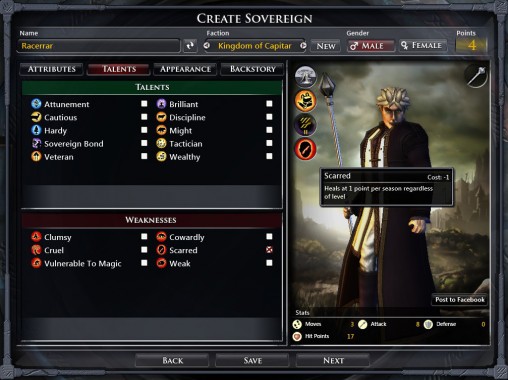 Beginning on a larger map may overwhelm newcomers, and thus I started on a tiny map myself – though this proved to still be quite large. An initial settlement is done by placing your cursor over a prime location (marked with most resources) and clicking the “Settle” button on your character’s bar in the lower UI. From there on you will be able to begin building up your newly created settlement through seasons. No matter how many seasons or “cycles” you go through, having a queue of tasks is essential in managing your settlements. A task could be anything from building a farm to producing new troops to the field.

Meanwhile back in the grassy plains of justice! Just kidding… Your champion is free to roam the wilderness with a starting band of militia. Spots of interest would include a green dot above a given tile or tan scroll to indicate a potential quest. Landing yourself on a green dot area will provide normally an unique item that can be equipped to your champion(s). Was that a plural indication? Yes, after earning enough “fame” through quests or slaying of monsters, you will be able to choose between a set of champions to join your cause. 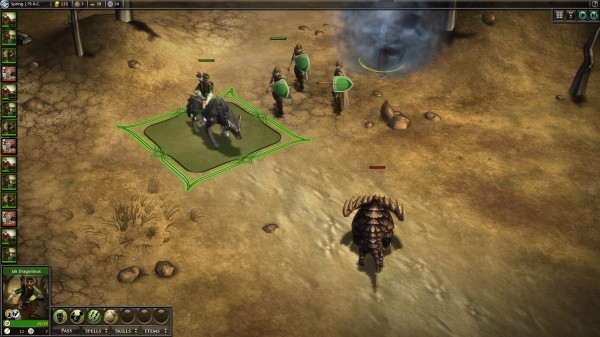 Battles occur either instantly or through a turn-based role engaging brawl. To escape the long-lasting drawl of continuously fighting battles, players may elect to automatically perform battles as they occur. Of course there is less strategy involved and more simulation done here. For those that can appreciate a long fought battle, the turn-based event is an excellent decision. You may have mage champions that can conjure elementals to the field or elect to use a scroll that damages all opponents. A simulation may not think of such things in the heat of battle!

End game is reached when you have met a prerequisite that you determined at the creation of the mission. Whether you want to attain total domination by slaying all opponents or to achieve world peace, there are plenty of end game scenarios for any type of player. What’s that you say? You want to bribe me to join your kingdom? I think NOT!

Conclusion
Stardock Entertainment is creating a fine strategy game that players are almost sure to enjoy. With the implementation of Scenarios, Fallen Enchantress: Legendary Heroes will surely create more individualized storylines for players to lose themselves in. Though the beta may have a bug here and there – more graphical then gameplay, it will yield a positive result upon completion this month. Stay tuned to here of Stardock Entertainment’s inevitable success with Fallen Enchantress: Legendary Heroes.

Prepare To Be Boarded In ‘Pirates vs Corsairs – Davy Jones Gold’