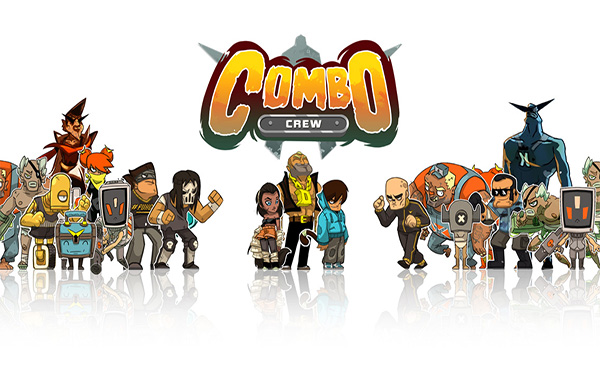 Similar to games like Street Fighter and Streets of Rage, Combo Crew was designed especially for today’s mobile gamers. The touch controls are smooth and intuitive, so your fingers do the fighting with no virtual D-pad to get in the way. You’ll swipe over baddies to attack them, tap and hold to unleash a powerful combo breaker, tap the screen to counter and swipe with two fingers to perform special combos.

The single player mode stars a trio of heroes; video game obsessive Parker, martial arts master Gina, and action movie celeb Dolph, who are being held prisoner in a giant tower. They must face off against hordes of enemies in order to fight their way to the top. Players must master each characters unique fighting style and special moves, unleash crazy combo streaks, and try for a high score to win the gold medal.

In co-op mode friends team up to rescue and revive each other from KO. Best of all, the multiplayer is cross-platform, so iOS and Android users can play together as part of the same crew.

With Combo Crew, we wanted to recreate the fun of playing a brawler co-op with a friend on the sofa, but adapt this to mobile gaming. So the Draw Something style asynchronous multiplayer really made sense. And if your friends aren’t around, no problem, we’ve included ourselves on the friend list. So if you’re in a pinch, you can request a rescue from The Game Bakers and one of the developers will help you out!

The trailer can be seen below.