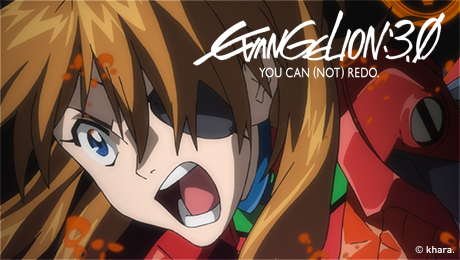 Madman Entertainment will be bringing back their theatre screenings across Australia and New Zealand in late 2013, with the latest Evangelion: 3.0 You Can (Not) Redo leading the charge. Madman previously announced the movie during Supernova Pop Culture Expo in Melbourne.

Four of some of the latest animated films from Japan will be featured during the cinema event, with the other three titles to be confirmed during the next three upcoming Australian Supernova Pop Culture Expos on April 19-21, June 21-23 and June 28-30.

This year marks the first time REEL Anime will feature as an annual event, rather than a bi-annual one. Last year’s screenings featured Studio Ghibli’s From Up On Poppy Hill, Mamoru Hosada’s Wolf Children, Makoto Shinkai’s Children Who Chase Lost Voices and Berserk Movie 1: The Egg of the King.

Movie times and locations are yet to be announced. Visit the official site for more upcoming info.

Evangelion 2.0 gets a review in the NYTimes!