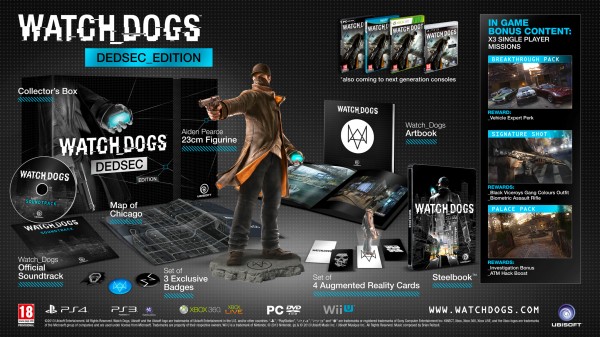 Ubisoft’s new IP Watch_Dogs has had much buzz around it since its reveal at E3 last year. Since that time more information has been releasing from securing its release date to this year, to confirmation on next gen consoles, to the last video they released last month. But now new information has hit like a car smashing into a retractable traffic barricade.

The new video gets more personal, but not too personal, with the main character Aiden Pearce letting players get to know him a little and what he’s trying to accomplish. The true depth of information doesn’t come  until the end where the release date has finally been confirmed as November 19th in North America and November 22nd in Europe. In addition to the release date the trailer shows off the penultimate edition of the game the Dedsec Edition.

However, the Dedsec Edition isn’t the only one detailed today, as three other editions of the game will also be available to those in the UK:

Players can check out the different editions by clicking on the images in the gallery below and watch the new Watch_Dogs trailer embedded below that. Watch_Dogs will be releasing for Xbox 360, PlayStation 3, PlayStation 4, Wii U, and PC on November 19th in North America and November 22nd in Europe.

Become a Part of Watch_Dogs