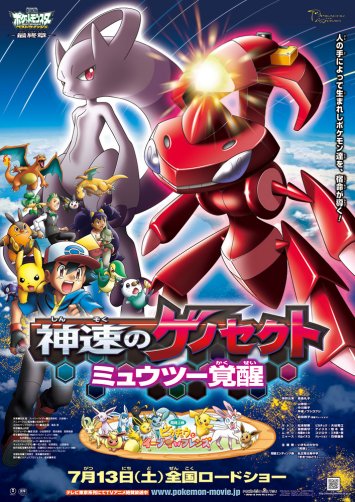 Today’s episode of Oha Suta has brought us something super awesome: A new trailer for the move Extremespeed Genesect: Mewtwos Reawakening and, damn, it’s a good one. The trailer gives us our first glimpse at the new Mewtwo form in action and shows us a bit more of what’s to come in the movie, not only has it shown us Genesects and a Mewtwo but the trailer also shows a bunch of old-school Pokemon that, personally, I’m heaps excited to see doing some good in the movie.

Now I got a lot of flak on my previous article on the New Mewtwo Form and it was mostly from people who believed this to NOT be a new version of Mewtwo, but from the new footage of this movie I think it’s COMPLETELY safe to say this IS a new form of Mewtwo and I say that based on the evidence that we actually see him transform. That’s pretty concrete.

The trailer also shows a bit of footage from the special Pikachu & Eevee Friends which is a short movie featuring the new Eevee evolution Sylveon.

So go and check out the new Trailer in the featured video section below and don’t forget to drop us a line in our comments section just under that.