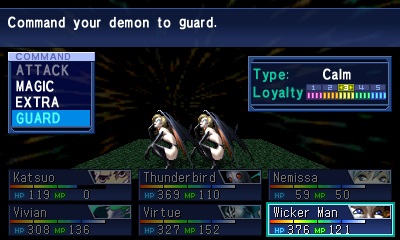 Today Atlus released nine new screenshots for their soon to be released 3DS exclusive Shin Megami Tensei: Devil Summoner: Soul Hackers. With only a couple of weeks until the game is released in North America, the company chose to focus on the game’s battle system with these images.

As you can see, players are able to give commands to their demons as they fight against other demons as well as answer various questions posed by their enemies in the hopes of convincing one of the enemies to possibly join their side. Anyways, expect to see Devil Summoner: Soul Hackers on April 16.