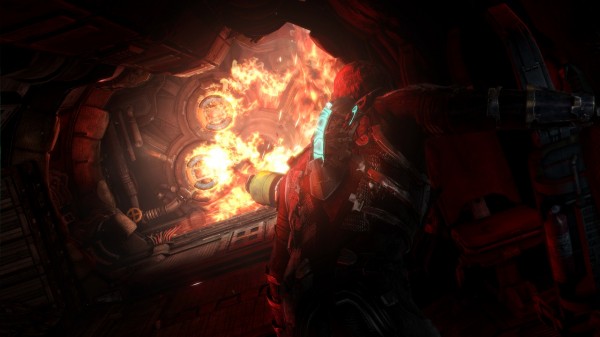 Dead Space 3 is a title that has long-time fans apprehensive and concerned. The seemingly human enemies, the implementation of cover, the perceived focus on action over horror…all of these aspects have been criticised from the get-go. While at the EA Showcase here in Sydney, Australia, I had to give it a try for myself and determine if these fears can be justly alleviated or not.

To preface these hands-on impressions, I must apologise, for I did not play-through the demo from start to finish. My scheduled interviews got bumped up, and after returning from them, I jumped onto Crysis 3 multi-player and played for much longer than I had realised. The demo was on the Xbox 360 and I carried on from where someone had previously left off, which was at about the halfway point. It was the first point in which you get to use the newly tooled and heavily expanded Weapon Bench.

Now, I hadn’t played a Dead Space game in quite a while and was lost as to what my current objective was. I couldn’t find how to execute the “guiding light” bread-crumb mechanic for the life of me (it certainly wasn’t mapped to the back button any more . The room I was in had the Weapon Bench, two ladders and multiple doors, all of which were disabled or locked at the time. After climbing the ladders and attaining some items, I accessed the Weapon Bench. Now, for those who haven’t seen yet, the Weapon Bench has been drastically enhanced to support the entirely new and deep customisation options for your weaponry. 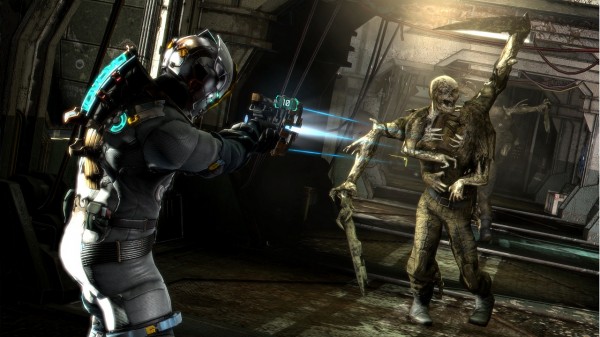 Upon accessing it, the first thing you see are 5 modules on the interface, each representing, from left to right: “Modify Weapons”, “Blueprints”, Weapon Upgrades”, “Craft Items” and “Inventory”. Modify Weapons is where you use the resources you’ve acquired to build weapons from scratch, piece by piece, putting together frames, tools, tips and attachments to build the ultimate weapon. Blueprints allow you to build pre-designed weapons. Weapon Upgrades allows you to upgrade your carried weapons, much like you would in previous entries. Craft Items has barely been touched upon, and allows you to craft ammo types amongst other things. Inventory allows you to store items, and even share them with your co-op partner.

I quickly made a modification with one of the only parts I had at that point, and upon exiting the bench interface and taking my newly upgraded weapon, discovered that the main door has been unlocked. I should have opened my Inventory interface and checked the missions tab to figure that out earlier. Moving on, I quickly used my Kinesis powers from memory (Hold LT and B) to open some doors by turning their wheel handles. Now, I must say, there were many doors like this…too many. It felt like every time I opened one, there would be another one directly afterwards waiting to be unlocked. Poor level design? Maybe, but it was starting to get quite repetitive. 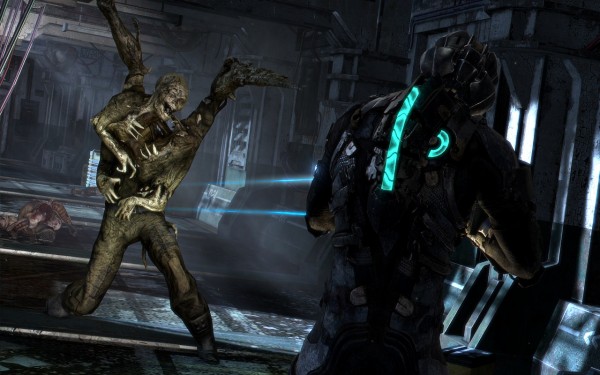 I quickly found some action in a corridor and used my plasma cutter to cut down many slashers who were hanging from the ceiling. After making sure to stomp each one (have to be sure!), I carried on. gathering ammo and super-conductors (although I wouldn’t have much use for them in a directed demo). Eventually I found myself entering into an in-doors zero-gravity zone. I clicked in the left thumbstick to step off and boosted forward with my thrusters only to trigger the appearance of some Lurkers from out of the connecting vents. Everyone knows they are easily dispatched, which was still the case here. I thrust forward to the opposing platforms and clicked in the left thumbstick again to land.

For those wondering, the atmosphere and tone of this demo is very much horror oriented. As you’ll read in a moment, the action does ramp up, but it’s nothing new to the franchise. In key moments, the pressure always mounts and confrontation get more intense. I proceeded forward and seemed to be nearing the end of the demo – which was short as it was. I entered a chamber with three engines or cores that I had to activate in order to progress. To do so, I had to use Kinesis to move this large component down and then again to spin another which conducted energy and generated the engine/core. Now, in between doing this, I naturally got ambushed by Slashers, and also new enemies previously referred to as Fodder. 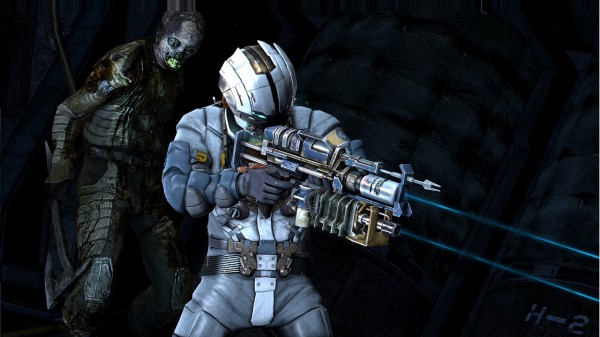 Doing enough damage to Fodder will result in their torsos exploding and revealing three large tentacles. They become rather quick too, and I began to get overwhelmed and outnumbered. Necromorphs were coming at me from all sides and I was taking damage, at which point the game reminded me to press “B” to replenish some of my health with a Med-Pack. Although there were many, they all went down quite easily.I finished the job, initiated the final activation sequence at a nearby terminal and exited the circular room. However, in doing so, I promptly got attacked by a massive slasher-type. No matter how much I mashed, it had no effect as it chopped off my arm and gave me a gruesome end.

And so that was the scripted end to the Dead Space 3 single-player demo. I came away from it feeling it was more of the same, but still solid. Granted, it was a very small portion of gameplay, so we have to keep that in mind. It leaned more towards the action side by the end of it, but the mood was classic Dead Space. The Weapon Bench, from my brief and hurried look at it, has many possibilities and combinations available to the player, provided they put enough effort into collecting the desired components and resources. And personally, the drop-in/drop-out co-op feature probably excites me the most about the game, which we didn’t get to see at the Showcase. So there’ll still much to see and much to be optimistic about.