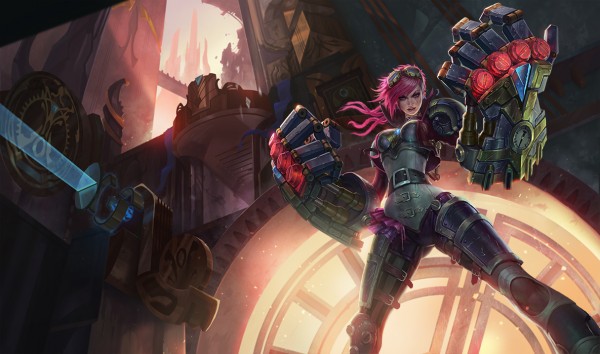 League of Legends is welcoming another fearsome female champion. Piltover has seen many champions in its day, but this one grapples like no other. Vi, the Piltover Enforcer, wields duel hextech gauntlets that can emanate excessive amounts of power. Enemy champions will be leaving the battlefield with not only a broken pride but also broken faces. Let’s take a look at this brawler’s abilities. 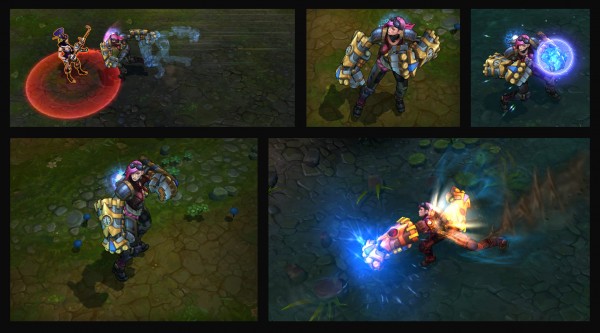 Lore
While Vi might be the Piltover Enforcer, she was hardly innocent in her childhood. Even at the age of 6, she was known for her skills and taken in by a band of misfits. Soon Vi became seasoned in the arts of thievery and tinkering.

On one of the band’s heists, Vi was struck with a difficult decision to make. She could choose to flee with the group or help the trapped workers in the mine. As time was dwindling away, Vi noticed an exposed robotic mining rig. She formed bonds around her hands in junction with the robotic appendages and became a walking machine. Punching the walls of rubble, Vi freed the miners from their imminent doom and in turn fled the scene herself.

From that day forth, Vi was more determined on using her new skills – only this time it was for good. She began stealing from the area’s thieves themselves warranting her notable recognition. Piltover’s sheriff caught wind of these acts and came face to face with the vigilante. Caitlyn offered Vi a position on Piltover’s police force to pay for her previous criminal debt. When given the chance to pummel evil without recourse, how could she refuse?

In effort to understand Vi’s personality better, heed her following words: “It’s a shame. I’ve got two fists, but you’ve only got one face.”