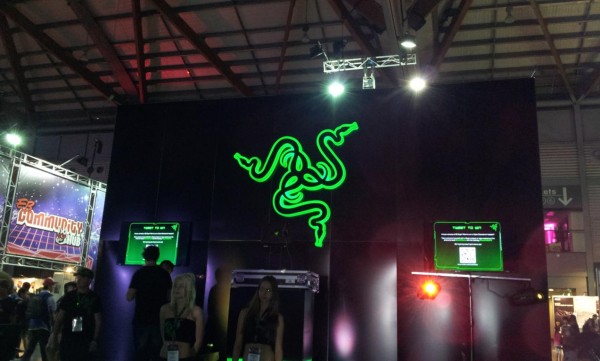 Razer, the largest gaming cult in the world, had an amazing presence at this years EB Games Expo held in Sydney over the weekend. The booth itself was adorned in iconic Razer aesthetics and carried an amazing range of upcoming Razer products for consumers to trial.

The products that really caught my eye were the Razer Blade and the still in development Razer arcade stick peripheral. We’ve talked about the Razer Blade extensively in the past (so much so that we have an interview with Min-Liang Tan on the product) so I’ll quickly gloss over the arcade stick.

This arcade stick looks like an impressive piece of gaming machinery. It isn’t as invasive as you might think it would be, I mean, when you think of an arcade stick, you think of this supermassive box with a huge stick coming out of it whilst the side is littered with gargantuan buttons. Fortunately for Razer, they seem to have developed an arcade pad that is both roomy enough to feel authentic, but also small enough to be non invasive. They’re also really good to play with as well.

What was really fun at the Razer booth was that on the final day, they had a kind of party going with a DJ coming in and playing mixes of popular tunes. I happened to catch a bit of footage of the crowd dancing to the popular K-Pop hit Gangnam Style by the rapper PSY. Be sure to check out that video embedded below.

Gamers get Charitable for Extra Life