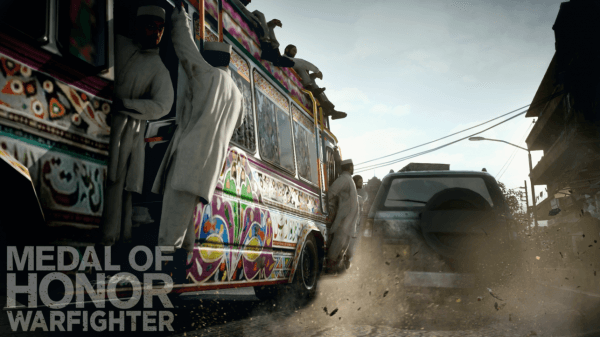 At a preview event at EA Asia’s publishing offices in Sydney, Australia, we at Capsule Computers got the opportunity to preview the single-player code of Medal of Honor: Warfighter. After a brief introduction by our special guest, the Creative Director of Multiplayer Kristoffer Bergqvist, we were treated to the then unreleased Karachi Car Chase trailer before getting stuck into two campaign missions. We played on PCs of course, although we had the option of using Xbox 360 controllers.

The two missions that were made available to us, in their entirety, included an updated version of the Somalia level shown at E3 earlier this June called “Shore Leave”, and an action packed car chase through Karachi, Pakistan called “Hot Pursuit” as Task Force Mako tracks down the PETN trail. Firstly we would be playing as “Stump”, a new character to the series, joining in the fight with Task Forces Mako and Grizzly against Al-Shabaab pirates in Somalia. Upon arriving via RHIB (rigid-hulled inflatable boat), we fought our way through onto the shore, starting off with a standard handgun and the HK416 rifle. The ability to change fire-modes between single-shot, burst and automatic was present in the HK416, while the ability to “ask for ammo” from a fellow team mate has returned the previous MoH title. Readily apparent was the “micro-destruction” as cover gets blown to bits, forcing players to constantly readjust and reposition. 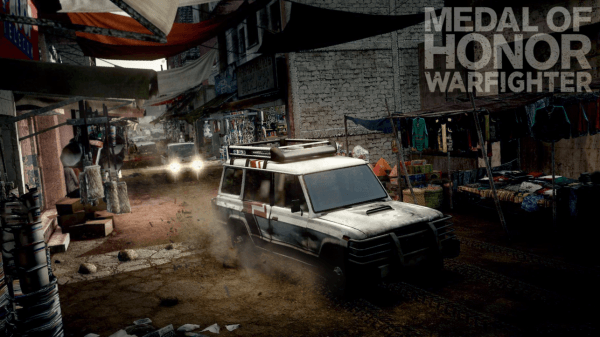 Immediately upon entering the first building, we come across our first “dynamic door-breach” opportunity on the second storey. In attempting the breach, a radial wheel pops up to the left of the door with three options highlighted. From top to bottom, they were “Kick”, “Tomahawk” and “Crowbar”. There were slots for more options, but they were greyed out. The kick was automatically unlocked, however the tomahawk and crowbar choices were to be unlocked by achieving 4 head shots for each. Choosing to kick open the door shows a teammate doing the honors as Stump throws a smoke grenade into the room, although this sequence seems to vary instance to instance. Stump automatically goes through the door, and a hud element showing how many enemies are present shows at the bottom of the screen, leading into a slow-mo event as you attempt to shoot every enemy in the room. The slow-mo is simply an advantage for the player, giving us the easiest opportunity to score some head shots.

After being required to paint a target tower and moving through it’s rubble, something to note (that was particularly noticeable at this juncture and is sometimes related to scripted sequences) is the slow pace at which you walk. The realism of carrying so much gear was obviously a goal for the dev team, however it felt excessively slow, almost to a crawl at some points. Shortly after, we get to a section requiring the deployment of a remote combat drone. This bot controls like a clunky piece of machinery, struggling to traverse some parts of the rubble as it sneaks up on unsuspecting Somali pirates. There is the ability to turn on a flashlight though, and also an option to toggle between a mini-machine gun and a mini-grenade launcher. Of course it’s field of view is restricted by it’s height, but the drone is effectively powerful. There was a moment where we were confused as to where we were supposed to go with the drone as we would be bombarded with bullets from virtually every direction if we ventured too far. We then realised that the drone was scripted to be destroyed as a means to return to regular combat and progress with our soldiers. 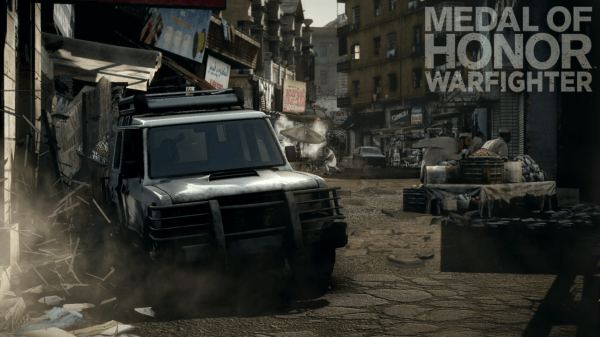 Moving forward, we would encounter many enemies, getting the opportunity to man a mounted, shielded machine gun on the back of an enemy utility vehicle, before reaching a sniper section. After positioning ourselves – via cutscene –  against a table for our vantage point, we proceeded to take out anti-air fighters. Again, harking back to the goal of being “the most realistic shooter” out, we come across the issue of trajectory. Because of the distance at which our enemies stood, we would have to aim our shots slightly above our target in the scope’s reticule. As the distance between us and our enemies increased, so too did this aiming offset. A nice touch. After clearing the zone, attack choppers fly in to destroy the enemy dwellings and the area at large. This is (understandably!) where the mission ends.

Coming back from a fade-out, we witness a cutscene reintroducing Preacher to us, who was featured as an important, but none-the-less non-playable character in the 2010 Medal of Honor reboot. Once it ends (no spoilers for plot points here!) we initiate a car chase through “the bad parts” of Karachi. The chase proceeds through the Empress Market area, into a slight traffic jam – which we forcibly rammed through – and up to the end point where we could finally catch up to our assailant. This is where the real showcase of Frostbite 2 kicks in as materials, particles…and chickens, go flying. Yes, you will be figuratively wiping chicken off your windshield. Of course, you are not able to catch the pursued until the game tells you to, at which point you can smash into him, leading into a short concluding cutscene. This may have been a heavily controlled and scripted conclusion, however the driving segments will surely be a nice break from the constant shooting in the flow of the campaign come full release. Interesting to note is the fact that the Need for Speed team had worked closely with Danger Close for this level, and the fluidity of the driving really shines through because of it. 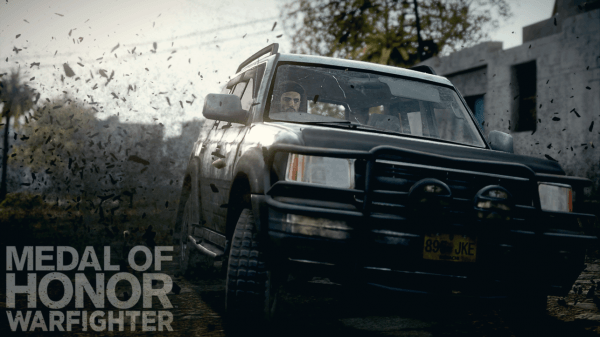 Some final observations worth noting are the differences in the difficulty settings and the graphics quality that Frostbite 2 provides. We played through these missions on both normal and hard difficulty settings, and the difference is staggering. What was irritating was the lack of effort that the squad A.I. makes when playing on hard or higher. They almost do absolutely nothing. There are more appropriate ways to balance difficulty levels than rendering your teammates utterly useless. As for the graphics, we had most settings put on normal by default and didn’t want to mess with them just in case. The game looked good, although the textures were not very detailed. Obviously nobody likes to play a PC game on normal settings, and so I am sure the majority will not encounter this issue on their beastly gaming rigs. Overall though, Warfighter’s single-player campaign is looking good and will hopefully bring some variety in it’s mission structure if the included driving section is anything to go by. Medal of Honor: Warfighter will be released in Australia on October 25th.

You will find the just released Karachi Car Chase Trailer below. Enjoy!

Medal of Honor Trailer is heartfelt