You can check out all the photos from the event below, or head on over to the Capsule Computers Facebook page if you like your photos ready for sharing.

Last weekend saw the second outing of the EB Games Expo, a three day event held in Sydney’s Olympic Park. The event attracted booths and presentations from all of the biggest names in gaming, with gamers from all over Australia flocking to the show. Capsule Computers was of course in attendance, and has a ton of coverage to clue you in on everything that went down.

From the opening ceremony that assumed stunt bikes had something to do with gaming, to the final minutes of the Sunday afternoon Cosplay Evolved competition, it’s all here.

Halo 4 walked away with the Most Anticipated Game award on Sunday, and you can check out the Multiplayer Preview here. Other big hitters at the event included ‘best in show’ Assassins Creed III, which as well as invading the main arena multiple times via presentations and a leap of faith-ing Connor stunt man, boasted one of the most solid queues of the event, along with ZombiU, Injustice: Gods Among Us, and everything Nintendo plugged into a WiiU. 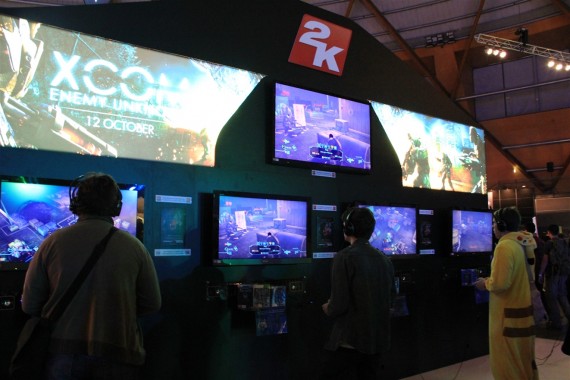 Sony had a good turn out with PlayStation All Stars Battle Royale, God of War Ascension (lurking as it was on the top of the booth) and a big arena presentation of The Last of Us.

Warner Bros had a great show, shoring up Injustice with the ever accessible Lego franchise, which was showing off it’s latest entry – The Lord of the Rings. Alongside a Lego Gandalf was a life size Batman, making sure that the WB corner was the place to go for some cheesy pictures. A myriad of accessory vendors were at hand to supply every gaming need, with Sennheiser luring in punters with the promise of free headsets and blue haired booth babes.

All in all the event was a great success – roll on next year!

You can check out all the photos from the event below, or head on over to the Capsule Computers Facebook page if you like your photos ready for sharing.

Click here to see all the articles from the Expo