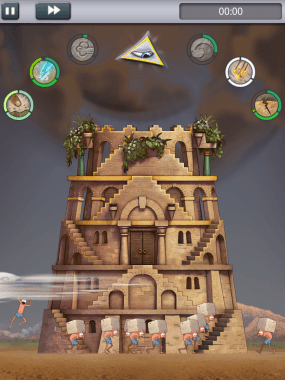 Babel Rising is back, building on the success of the previous game! Babel Rising: Cataclysm is a freemium sequel for iOS, building, improving, and expanding upon the previous game. The game allows player to take on the role of God and strike down humanity with 12 upgradeable powers, five of them brand new, as humanity attempts to build the tower of Babel . Humanity has some new tools too, bringing in two new units to help build the tower. There is a 40 mission story mode and a Survival mode along with Facebook and Game Center integration. Babel Rising: Cataclysm is slated for a September 6th release