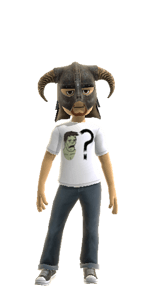 After a short interlude, Xbox Live News with Pipper strikes again as a plethora of deals are coming your way. In honor of the Bethesda deals this week, I have decided to put on my Skyrim helmet. I may not possess any shout abilities, but I can at least speak about the awesome deals.

From the 11th to the 17th, Xbox Live users will notice plenty of savings with Bethesda and Microsoft Arcade titles/downloadable content. Towards the end of the month Ubisoft takes the reigns with Scott Pilgrim (WHAMMMM!).

And now for the new releases hitting the virtual shelves of Xbox Live. PopCap Games is releasing Zuma’s Revenge along with some interesting avatar items to dress up like a giant frog and tribal warrior. Also Minecraft updated there arsenal of avatar goodies.

In addition to the many deals, we will be seeing some popular titles for games on demand. Portal 2 has already made itself available while UFC Undisputed 3 and Otomedius Excellent are on route on July 18.

Make a rendezvous with Fallout 3 and Oblivion expansions, and always remember to “Play Hard or Don’t Play At All!”

Is POPCAP getting POPPED?