Panels with two people are often the most entertaining, allowing them to play off each other. The history between Armin Shimerman and Max Grodenchik, playing the Ferengi brothers Quark and Rom in Star Trek, gave them rich ground to draw from during their panel at Oz Comic Con in Melbourne.

On the flip side, Armin pointed out the irony of wearing huge prosthetic ears, which covered his own and made him mostly deaf.

When asked how the actors gave the different Ferengi characters they played distinct personalities, the two replied that it was mostly in the writing. The scripts dictated how the characters were different. 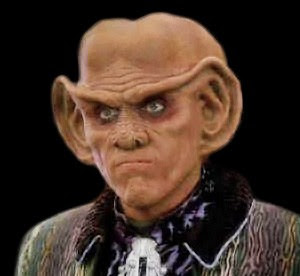 Someone then brought up the incident where a Ferengi was spotted driving in suburban Los Angeles, and Armin recounted the story he has no doubt told many times at conventions. He was on the studio lot, having the Quark makeup applied early one morning, when he felt the trailer shake: the unmistakable and fairly common LA earthquake. It wasn’t too serious where he was, but he called his wife and was told it had dealt some damage at home. He left the lot in a hurry, still with the basic Quark mask applied. On the way home, he noticed the startled expression of another driver, who spotted a Ferengi driving the car beside him. I want to know what went through that other guy’s head. You just know he’s still telling the story to everyone.

The duo then showed off their talents: Max rapped a humourous spiel about the Ferengi – most of which went over my head, with my extremely limited Star Trek knowledge. Armin then performed a Shakespearean monologue, belting it out to the back of the hall without a microphone.

Sick of hearing about Star Trek, I whipped out one of my interview questions to direct the discussion to Armin’s video game work, and it seemed many hadn’t realized he provided the powerful voice of Bioshock’s enigmatic Andrew Ryan. As it turns out, he was not shown any of the art and visual style of the game prior to recording the voice. You can read our interview with him on his video game work here. 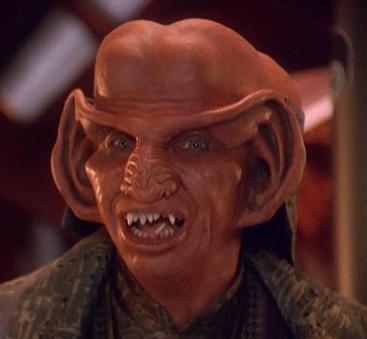 It wasn’t long before the conversation went back to Star Trek, as someone enquired about whether it was a conscious decision to have so many Star Trek actors end up on Boston Legal. Armin believed it was because both are quality shows and, without sounding too uppity, required quality actors, with classical backgrounds. He drew the similarities between Star Trek and Shakespeare, in that both deal with similar themes, in larger than life stories. There’s also that flowery language to master: Shakespeare is famous (and infamous) for appropriating English to his own style, and it can be said that Star Trek, with its complicated techno-babble, requires actors to get their heads and tongues around difficult words to a similar degree. Using classical actors, who have experience in Shakespearean language, means they’re one step closer to mastering that aspect of classic sci-fi.

All up, it was an entertaining panel, thanks largely to the chemistry between Armin and Max. The pair were able to maintain a discussion that engaged even those without much Star Trek knowledge. Like me.