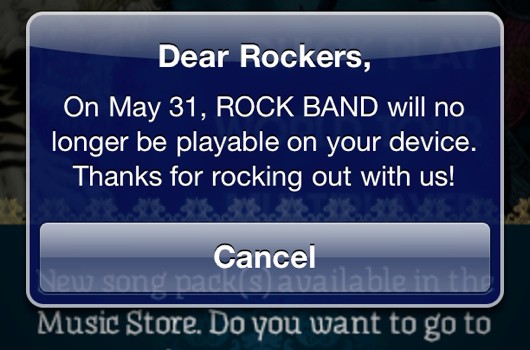 Yesterday anyone who had the Rock Band iOS app on their phone was presented with an alarming message saying that their app which they bought with their own money and most likely paid extra money for to get more songs, was going to be shut down and “No longer playable” after May 31st.

In what can only be seen as an immediate backpedaling, EA released a short statement to Joystiq stating: “Rock Band for iOS will remain live – the in-app message users received yesterday was sent in error. We apologize for the confusion this caused. We’re working to clarify the issue that caused the error and will share additional information as soon as possible.” Whether it was an actual error or EA chose to keep the app alive after public outrage may always remain a mystery.