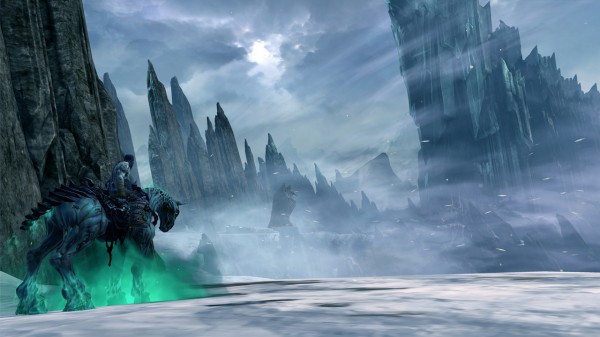 The snow lies all around him, his dark cloak fluttering in the breeze. Ahead lies the mountain – at the summit lie answers. Death strode forward. He would redeem his brother, whatever the cost.

Such is the scene which opened the new hands-on demo of Darksiders II at a recent THQ pre-E3 event. War, the first rider of the apocalypse and the protagonist of the first game, has been falsely accused of triggering Armageddon ahead of its allotted time, and so has been punished by the Charred Council, the adjudicators of balance between the realms of heaven and hell. It’s up to his brother, Death – the second rider, to clear his name, and perhaps even repair some of the devastation caused by the end of days.

We’ve already gone hands-on with Darksiders II previously, but this portion of the story takes place much earlier in the game, and, as such, the key features of the game were slowly introduced as I progressed through the level, rather than being dumped on me all at once.

As Death makes his way up the mountain, frozen guardians burst out of the icy capsules which contain them, and after dispatching a few of them with a combat system familiar to anyone who has played the first Darksiders (or indeed, most other action games in the vein of God of War) one thing becomes immediately apparent: there is loot to pick up. And lots of it.

Darksiders II features a fully fleshed-out inventory system. While the Death I’d played with in earlier demos had already received significant, dev-assigned help with his armour, this guy had nothing but his scythes between him and the cold hands of…er, well death. The loot drops make an immediate impact both aesthetically  and in terms of gameplay. Death can take a lot more damage with armour on, obviously, and he can also pick up new weapons to increase his damage output. 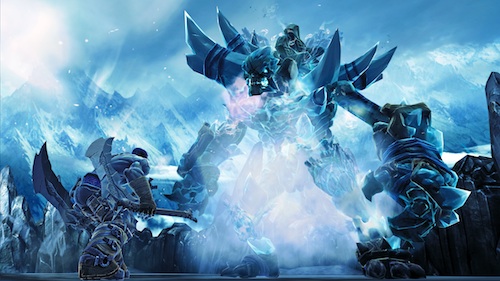 The system is quite well designed, as loot can be equipped or sent to the inventory directly from the game screen without navigating a menu. The system also compares items of the same type while you’re picking them up, again saving you the hassle of menu navigation and easily letting you know whether you should trade out your old boots for the ones you just found. I can easily see this part of the game becoming almost Diablo-esque in addictiveness – I got excited every time something dropped, and, though I could bypass some of the enemies, I chose to fight the mountain’s inert guardians just for the sake of loot. With the promise of side-quests and dungeons hidden all around the world of Darksiders II, there’s potential for some serious hours to be dropped into the game all in the name of finding that new piece of shiny gear.

As Death continues on his quest towards the summit of the mountain, the game prompts you to make him climb, wall-run, and vault over objects in a manner that is much more reminiscent of Prince of Persia than the original Darksiders. Where War was the personification of an indestructible brick wall, Death is agile, cunning, and far more mobile. This means levels within the sequel will feature a lot more verticality, and the various ways in which Death scaled up to the mount’s summit constantly surprised me. For all intents and purposes, a mechanic of the game which could easily have been called second best in the original Darksiders was reborn here in a way that not only kept me on my toes, but added a great deal of variety to the level in general.

The level culminated in a confrontation with a story-specific character that I won’t spoil here, but suffice it to say that it’s not just the levels of Darksiders II that are full of surprising twists and turns. The boss-fight itself was quite challenging – this is no casual game. In fact, I’m fairly certain one person on the floor was actually able to beat it before having to hand a controller off to someone else. 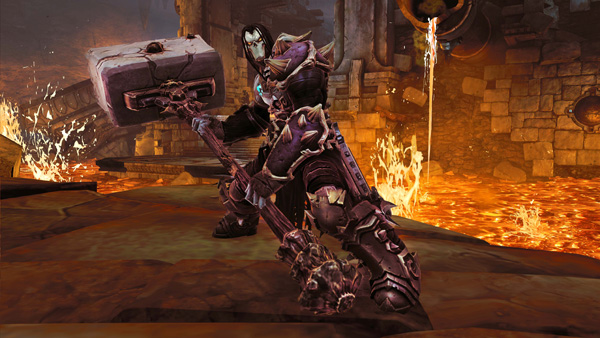 In terms of art direction, you can expect something very similar to Darksiders. The comic book style is really appealing to the eye, but, aside from a few lighting improvements, it doesn’t look like the graphics engine has been much improved over the last two years. It’s certainly not ugly, in fact the art style could probably make a technically inferior game look great anyway, but with new games constantly pushing the bar as we near the end of this console cycle, it’s a shame to see not much was improved upon.

Regardless, Darksiders II is shaping up to be a colossal game full of cinematic moments, intense combat, and enough loot to make the heavens green with envy. For more news on Darksiders II as it comes, be sure to stick right here at Capsule Computers.