The Parrot A.R. Drone 2.0 is the second iteration of the A.R. Drone flying device by Parrot. The device itself is very reminiscent of a hovercraft, rather than a helicopter, which is probably the first thing you will think of when you hear the words ‘flying device’. At an undisclosed location in Sydney, us here at Capsule Computers were able to give the device a nice test-flight.

The original A.R. Drone was pretty much just a toy that you could fly around and have a bit of fun with. The second iteration of this machine more closely resembles a spy device, rather than a toy for fun. This new device has improvements in the User Interface, flying controls as well as a recording method which allows you to record that which the device is seeing through its cameras.

As well as these abilities, participants are also able to attach a USB to the internals of the machine to save videos to, rather than doing it on their handheld devices. I should probably mention that the machine is controlled through mobile (cellular) phones, predominantly the iPhone and the Android type devices. I can see this device becoming useful in making home movies, or for less honourable uses (like watching the cute girl next door getting changed), though I would really like to see this being used by Hollywood and the like for really getting in close to the action. 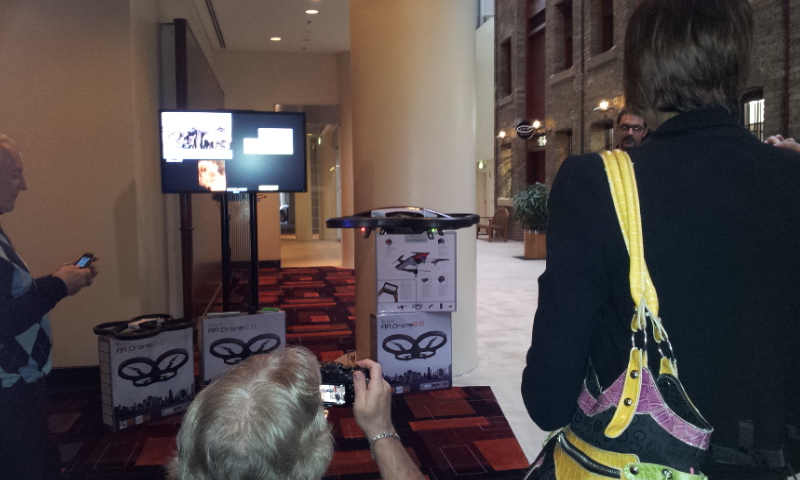 What I really enjoyed about the A.R. Drone was how customisable you could make your experience with the device. By editing various parameters within the handheld app, you’re able to make the flying experience customisable for your own level of comfort. So if you’re a parent and don’t want your kids to lose this piece of equipment, you can easily adjust these parameters on your phone and hand the device to your child to play with, knowing that it’s likely they wont lose it in a river.

Another thing I enjoyed more was the different modes of flight available. One method is a line-of-sight method between the device and the Drone, in-which the device will always read your point of reference as forward, rather than the way it’s nose is pointing. The other flight method is a more video-game like method where it’s forward is always dictated by the direction that the camera is facing, which will require you to keep focus on both the screen and the Drone itself to keep it out of trouble. I found the first control method to be the simpler of the two, but I found the second to be the more satisfying. You can easily change between these control types in the options menu, even when you’re still in flight. 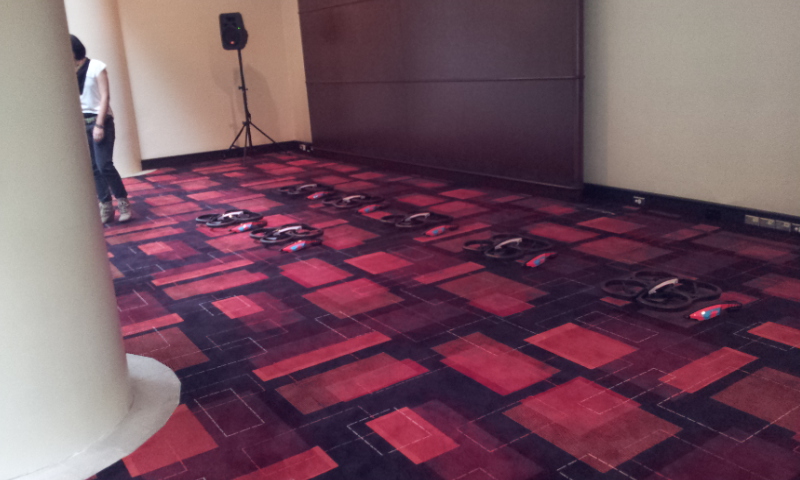 One thing that bugged me a little about the device was that the carapace was too easily dislodged by collisions, I think that this could have been easily circumvented by adding little locks on the base of the device. But then again, the engineers behind the device will probably have thought of that and deemed it a risk to the vehicles safety. Like the force of a collision could force the locks to rip the shell or something. One thing that I’d really like to see though, is some kind of “Return Home” button, where the Drone can fly on a direct path back to the owners phone., because at the moment (and while nothing is final) you have to manually retrieve your device if you don’t fly it back yourself or if its batteries are running low.

But other than those little nit-picky things, I found the device to be an enjoyable experience and I would heartily recommend it to anyone with an interest in flying machines. The device is also backwards compatible with the previous versions of Ar-Drone Free Flight, but the latest version will give you all the functionality that was described in this article.

The A.R. Drone 2.0 feels like it’s going to be an amazing piece of technology once it’s released. It has all the hallmarks of an adventurous toy, or even the potential for a spy gadget or actionshot camera. The greatest value of this device is that it completely operable from your own smartphone, meaning that there is no clutter or massively insane control mechanisms. This is definitely something that you will want to be picking up for a bit of fun or other kinds of film based activities (home movies, etc.). Be sure to look for these on Shelves this June.

Check out our video embedded below for more coverage.

A Slew of AR.Drone Videos for their Massive Updates