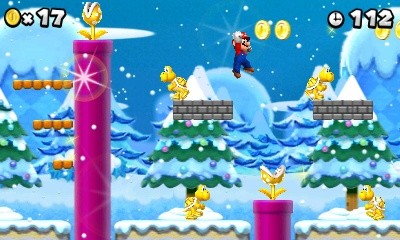 Last night during a Nintendo Direct event, Nintendo revealed that there would be a new Super Mario game coming to the Nintendo 3DS. At the time the game, which is to be called New Super Mario Bros. 2 was only announced for a Japanese release in August, but today Nintendo of America released their own set of press releases to coincide with the event.

This press release stated that New Super Mario Bros. 2 would be released in the West as well. The game itself is being described as a “traditional side-scrolling adventure game” that was designed “specifically as a pick-up-and-play experience.” As you can see above the gameplay itself looks to be very much unchanged from the classic Mario titles, though expect more information soon.