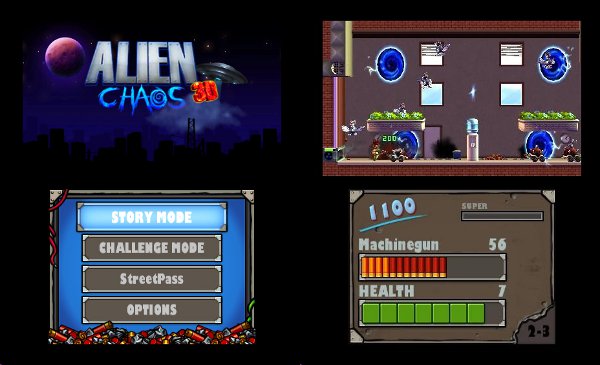 Reef Entertainment announced today that they’re bringing a new game to the European Nintendo 3DS eShop this Summer.  Alien Chaos 3D is not your normal shooter game, featuring weapons from a Peashooter to an Explosive Flaming Chainsaw Shotgun.  The game stars Really Shooter, a part-time commando, who works full-time at a cleaning service with Poor Mama.  When aliens start to attack, Really has to fight to stop them, but that’s not all, as he has to clean up after himself to earn points from Poor Mama.

Enemies include a variety of robotic animals from robo-boxing kangaroos, to hedgehogs with rocket spikes, to shield-totting hippos.  The 3D effects include explosions, smoke, and debris across the game’s 5 chapters, 30 levels, and 5 bosses.  In addition, Street Pass will allow players to trade high scores with friends and other players to see how well you’ve cleaned up.  Watch out for it this Summer.