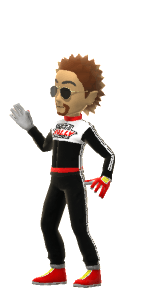 Oh my gosh, could it be? Yes, ladies and gents it is that time of the month again, and thankfully I’m not an enraged walking hormone attacking people with a wooden spoon – splinters kill. Dawning a Sega Rally Online Arcade racing suit, the Pipper is here to announce some crazy awesomeness coming soon to an Xbox near you. We have a nice line-up this week involving some voluptuous savings as well as new downloads to satisfy your gaming hunger.

Well, first up is our Deals of the Week. Exclusively for this week, there is a succulent sale for anything Bioshock 2 related. Finally get your hands on one of the Big Daddy suits at a discount price! As we near the end of the month, a racing banaza of sales will be zooming through. Take another left turn to get Daytona USA or Sega Rally Online Arcade for half off!

Here are the new releases from March 20 to March 28.

During our last Xbox Live News with Pipper, Konami went on a rampage dealing savings to most of its downloadable titles. Following suit THQ is delivering a half off sale on certain items from March 20 – March 26. Additionally, Xbox Live announced they will be having a sale from March 27 to April 2 for Games on Demand. The current line-up for Games on Demand are as follows: Deus Ex: Human Revolution, Kinect Sports, Gears of War 3, and Two Worlds II.

Hot diggity-dog! With the plethora of deals what will you download in the coming weeks? Let us know in the comments below, don’t forget – Play Hard or Don’t Play at All!