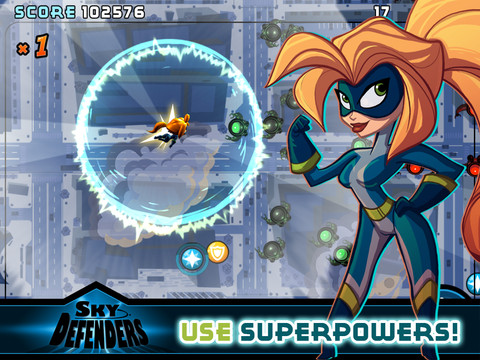 An independent developer by the name of Superplay Games has just released a new game onto the App Store.  Sky Defenders  will allow gamers to experience “nostalgic, ’80s arcade-era gameplay, modernized by the iOS motion controls and contemporary cartoon-style graphics.”

In addition, players can “take on the role of a superhero defending the city from invading hordes. Flying high above the streets, gamers use tilt controls to navigate the skies and destroy enemies in order to protect the city below. Each superhero features its own unique power-ups, offering players multiple ways to chain together combos and rack up huge point scores in their quest to survive and wipe out the opposing forces. Sky Defenders also features an online leaderboard so players can post their high-scores and challenge their friends to try and beat them.”

“Our first mobile title, Cosmonauts, was a huge hit with fans and the nostalgic gameplay seemed to really resonate with a lot of players,” said Paul Della Bitta, president and co-founder of Superplay Games. “We modeled it after some of our favorite, old-school arcade games, and then updated it with great, cartoon-inspired graphics and motion controls to add a modern twist.”

Some key features of the game are:

Sky Defenders can be bought for $0.99 on the App Store for any iOS device that has been upgraded to 4.0 or above.

Superplay Games also developed and published a free game called Cosmonauts,  which is available on the  on the App Store.

The Sims Medieval storms the iOS