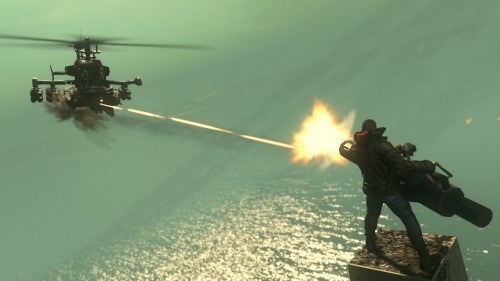 Choppers are becoming a daily part of James Heller’s life after being infected with the Mercer virus. So it isn’t a surprise that a couple of chopper types will be included in Prototype 2 for the player to have fun with. Two types of choppers will try to take down Heller when he starts stirring up trouble: the Transport Helicopter and the Gunship. All Heller needs to do is to give them a piece of his mind. Like the first game, send Heller in with a flying kick from above or rip apart from underneath it with a fierce uppercut. You can also steal its weapon system and turn their weapons against it.

Here is some more information on both choppers:

Transport Helicopter – This transport helicopter flies soldiers into the heat of the battle … that you most likely began.  Hop inside for faster and safer transportation with a primary weapon that will saturate large areas. Also don’t forget its secondary weapon–the Rocket Pod–which can be weaponized and used for decimating enemies while on foot. Try your hand at an acrobatic death blow with the Claw Finisher. Tumble along the top of the chopper while slicing off its rotor, then sit back and watch the helicopter’s inevitable and fatal decline.

Gunship – The gunship may not be the safest vehicle in the world, but it is good at one thing: finding your enemies and blowing their heads off. To spice things up, remove its Missile Launcher and incite some mass panic in the streets. But this gunship ain’t so tough—watch it fall apart when you slice it in half with your Whipfist Finisher.

You will be able to rip these choppers when Prototype 2 is released on April 24 on the Playstation 3, Xbox 360 and PC. Of course, if you have Prototype, you can bring those choppers down from the sky right now or check out our chopper gallery below.