Now you may be wondering how any film, let alone the latest Sacha Baron Cohen effort, can be victorious at the Oscars without being released yet. Well the Dictator’s victory was of a different sort:

VICTORY IS OURS! Today the Mighty Nation of Wadiya triumphed over the Zionist snakes of Hollywood. Evil and all those who made Satan their protector were vanquished and driven into the Pacific Sea. What I am trying to say here is that the Academy have surrendered and sent over two tickets and a parking pass! TODAY OSCAR, TOMORROW OBAMA! 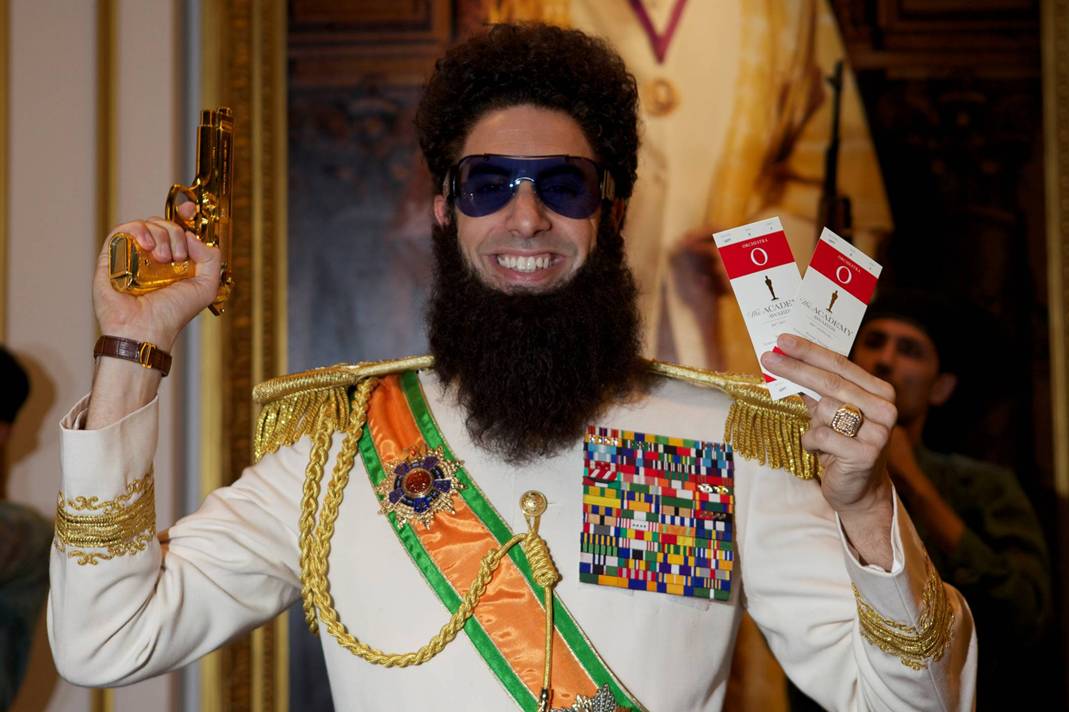 In case you missed it, the Academy Awards had apparently banned Sacha Baron Cohen from attending the ceremony because he was all set to attend in full The Dictator regalia. Despite the fact that he starred in a nominated film (animated flick Hugo, which went on to win several awards) and is a member of the Academy, his tickets were supposedly pulled and backing studio Paramount commented to Deadline: “Unless they’re assured that nothing entertaining is going to happen on the Red Carpet, the Academy is not admitting Sacha Baron Cohen to the show.”

So there you have it, the Academy Awards banned anything entertaining from happening at the Oscars. At least for a little while, because the instant media backlash quickly changed the Academy’s mind, and Cohen was soon re-invited. Now you should note the key words here: apparently, and supposedly. According to the Hollywood Reporter no invitations were revoked and no tickets pulled – they Academy simply didn’t like the idea.

Whatever the truth of the matter, it’s certainly paid off for Cohen and The Dictator – hundreds of millions tuned into the Oscars this year, with the show enjoying an upswing no doubt thanks to returning host Billy Crystal. Media outlets around the world churned out news of the supposed snub, and Baron Cohen can congratulate himself on another publicity stunt well done.

(and in case you didn’t catch the stunt, you can check it out for yourself below, Ryan Seacrest is the victim, I know that may persuade some…)

New Trailer Released for The Dictator Shows a Softer Side