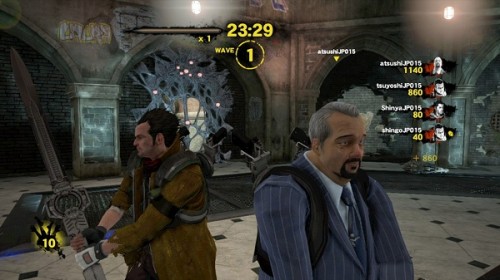 The second DLC Expansion pack for Neverdead has been released for PS3 and Xbox 360. In volume 2 players get to combat new hazards and get through some even more grueling challenges while trying to keep an eye on all of your limbs. You can also enhance your online playing experience with a new playable character, National Anti-Demon Agency (NADA) Chief Sullivan, three new challenges in the expanded Sewers level and two additional online costumes for Bryce Boltzmann, just in case you want to spiff him up a bit.

The sewers level also includes an egg hunt, where you go around collecting items to deliver them to ‘Score Zones’, as well as a competitive race through a number of checkpoints, and unlock sewer levels by defeating enemies.

This new DLC is sure to keep you on your toes, just make sure that you keep a hold of all of your limbs as well! Neverdead DLC Volume 2 is available NOW, make sure to head on over to XBLA or PSN to grab yourselves the DLC for some body-part-separating-fun!