Video games seem generally more focused on making war, not love, but whether you’re rescuing another helpless princess, cracking on to every NPC of the opposite sex, or playing super-creepy Japanese dating sims, romance abounds in the gaming world.

In the spirit of Valentine’s Day, here’s our round-up of relationships you could spend some time developing/ruining today.

DISCLAIMER: We accept no responsibility for damage to relationships with actual persons, as a result of pursuing the following relationships. 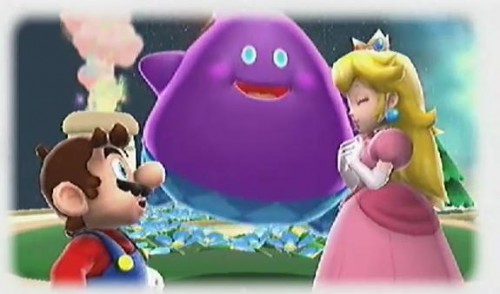 Gaming’s royal couple, Mario and Peach, are inseparable – you know, when she isn’t being kidnapped. But that’s a small obstacle, and Mario takes it as a chance to jump on his white steed (or green dinosaur), ride to her rescue and express his love by slaughtering hordes of turtles and destroying castles to get her back. Other guys might buy flowers.

Their relationship is the archetypal hero’s journey love story, and suitably frames the series’ simple gameplay with a goal relatable to people of all cultures.

That said, judging by the frequency of her abductions, Mario is either an inattentive lover or Peach has something going on the side with Bowser. Either way, their relationship may seem perfect at a glance, but it looks like the plumber and the princess have some issues they need to sort out. 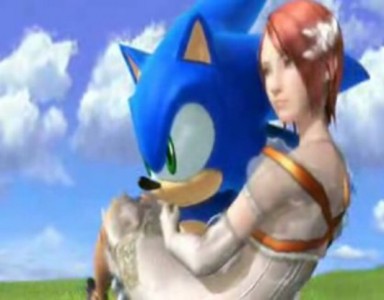 From perhaps the most loved gaming couple to the most contested, the bizarre love story in the 2006 Sonic the Hedgehog reboot, between Sonic and Elise, the very human Princess, is often cited as a jumped-the-shark moment for Sega’s manimal mascot.

In a buggy game with slippery physics, claustrophobically-linear levels, and a convoluted plot, the bestial relationship was the unpleasant icing on an already-unpleasant cake. It’s no wonder that Sega has since swept Elise under the rug, with nary another appearance or mention in the series.

Not only was she a human with a thing for hedgehogs, but she looks like a stock-standard anime character, out-of-place in the Sonic universe.

Promise me, dear reader, that you won’t spend Valentine’s Day (or any other day, really) rescuing Elise, and enduring that awkward kiss that sparked many a creepy Internet fan-fiction story. 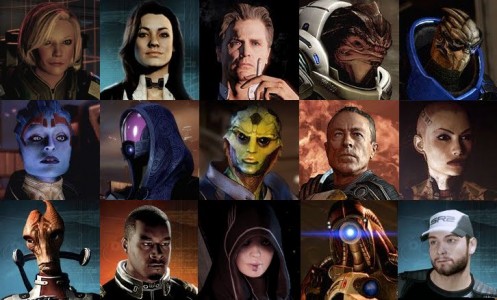 Shepard and the Entire Normandy Crew

Most games give you some choices: Which character do you play? Which weapon do you use? Which part of the enemies’ bodies do you shoot?

Others let you choose more peaceful things: the length of your character’s nose, shoe size, their favourite breakfast food.

In the first game, Shepard can pursue a relationship with Ashley or Kaidan, depending on the player character’s gender, while either gender can start something with Liara.

In the second game it gets more complicated, allowing these relationships to continue, as well as opening up no less than nine more characters you can become involved with. It’s been confirmed that the third game contains new love interests, and the option to continue others you’ve carried over.

A player’s romantic choices mostly just colour their experience in the world, and won’t really affect the flow of the overall narrative, but the feature gives the characters more personality than in most games, and sets an interesting precedent for characters of future games to be more than macho military men devoid of personality. 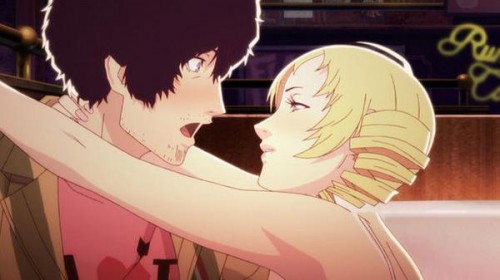 Vincent and Katherine and Catherine

Atlus’ recent game Catherine is a strange mix of platforming, puzzle solving, horror and romance, tasking players with determining the fate of the protagonist Vincent’s love life. After his long-term girlfriend Katherine (note the “K”) begins to talk of marriage, Vincent’s subconscious freaks out and forces him to climb blocks, with anthropomorphic sheep, in his dreams. Hey, it’s a Japanese game.

Soon he meets and begins an affair with Catherine (that’s with a “C”), which just complicates matters. There are inklings of a conspiracy behind the nightmares, and a subtle choice system means the sum of Vincent’s actions dictate the ending the player will see, without necessarily making huge, obvious decisions like those in Mass Effect.

Catherine plays like a basic puzzle-platformer in Vincent’s nightmares, and in his waking world it’s all about dialogue with NPCs and performing relatively mundane activities, similar to Heavy Rain. Its focus on characters, romance and more realistic relationship problems make it stand out, and the Japanese weirdness of the dream sequences are the icing on the impending wedding cake. 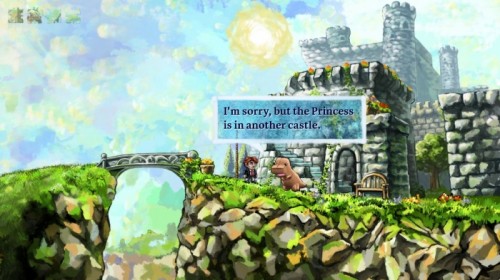 Time-traveling Tim and his atomic princess

Much like the namesake hairstyle, Braid is a tightly woven little package, and to unravel it isn’t easy. Creator Jonathan Blow insists there’s a specific meaning hidden in there somewhere, but it’s so vague that people have come up with a lot of possible explanations.

Whatever its true meaning, Braid begins as a simple guy-rescuing-princess story, and evolves into something much more complicated as the game progresses.

What we do know (or do we??) is that protagonist Tim is trying to find his special someone, who’s been taken by a monster of some sort, and he harbours a deep regret he wants to wipe clean.

To rescue his princess and absolve his past deeds, he must manipulate time in various ways to traverse a beautiful 2D puzzle/platformer world.

It’s not until the end that things come together, and rather than getting clearer, it spawns a multitude of theories.

I’ll warn you of spoilers now, before I launch into the ending. If you don’t want it ruined, why not skip down and read about that slut, Ditto?

Ok, so if you’ve reached the final level of Braid, you’ll know that when you finally find your princess, she’s in the arms of a knight. She escapes, and runs along above you, clearing your path through the caves below. When you finally reunite, the tone changes. You’ve been manipulating time all through the game, so it’s only fitting that at the end, time is not what it seems. The scene of your princess running towards you is reversed: she was running away. You are the monster, Tim’s regret is whatever caused her to run from him, and the game is him trying to win her back.

That’s the basic ending, but there are other theories. There are apparently eight stars you can find in the game, which unlock an alternate ending. These stars are never officially said to be in the game, and are so ridiculously obscure to find that I doubt anyone honestly discovered the alternate ending without the Internet’s guidance. For instance, one star supposedly requires the player to stand in a level and wait for two hours. Yeah, screw that.

Anyway, once you collect these stars, the ending plays out a little differently. When you reach the princess, she disappears in a blinding flash of light, and you clearly hear the sound of a large bomb going off. Texts found afterwards quote:

“On that moment hung eternity. Time stood still. Space contracted to a pinpoint. It was as though the earth had opened and the skies split. One felt as though he had been privileged to witness the Birth of the World… Now we are all sons of bitches.”

These are direct quotes from writings about the detonation of the first atomic bomb. As such, some hypothesize that Tim is a scientist working on the atom bomb, the “princess” is the key to its invention, and the regret is the detonation.

Others give it a feminist meaning (somehow), and some just dismiss it as aimless pompous prose, deliberately vague writing with no specific meaning.

Whether the princess is running away from our protagonist or she’s actually a nuclear bomb, Braid weaves an interesting take on the classic love story. 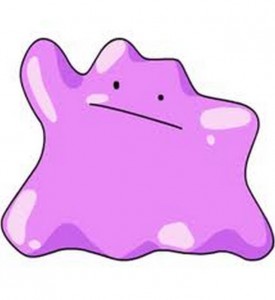 Ditto and 600 Other Pokemon

Don’t lie – while playing any version of Pokemon, you had a slut Ditto you used to breed Pokemon. I know I did.

In the later Pokemon generations, players could breed their Pokemon for trading, completing the Pokedex, or grinding for better stats. Just drop a similar-species male and female Pokemon off at a Day Care Centre, and come back later to find an egg, which (without going into the crazy statistics) hatches into a young version of the female, in most cases.

Pokemon can only breed with similar Pokemon, except one – Ditto. That weird little blob has no standards, breeding with anything it’s left alone with and effectively duplicating its partner. It’s such an efficient strategy that there’s really no reason to bother breeding at all without a Ditto involved.

I ended up with a Ditto as a permanent resident of the Day Care/farm/brothel, throwing in any Pokemon I needed copied. Meanwhile my brother started up a lucrative business, endlessly breeding rare specimens and trading them on the Pokemon Black Market for any other critter he wanted.

It’s not a shining example of love by any stretch, but a world where people make their pets do everything for them is already pretty messed up. Why would their idea of love be any different? 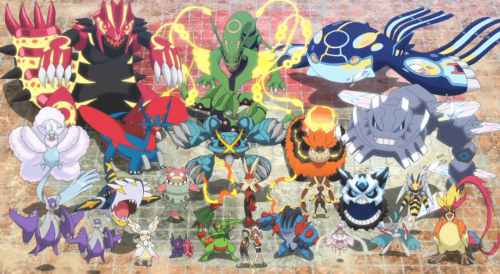