A new champion is approaching, and word of her arrival is quickly spreading. Fiora, the Grand Duelist, is shown in the comic reel below wielding a single blade against a large opponent in the streets of Demacia. Unlike other customs of Demacia, duels are a time honored occurrence and can be seen quite regularly. Yet anyone that walks into Fiora’s path rarely comes out alive. 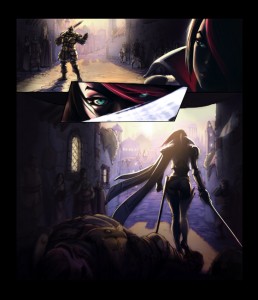 Adding Fiora to League of Legends will help bolster the ranks of female melee champions. Perhaps Riot Games is making a statement that female characters can be as tough as any other champions in the league which is undeniably true. Summoners have known this ever since Katarina walked on the Fields of Justice. As every new female champion is released, we also know one more piece of information – they are very appealing.