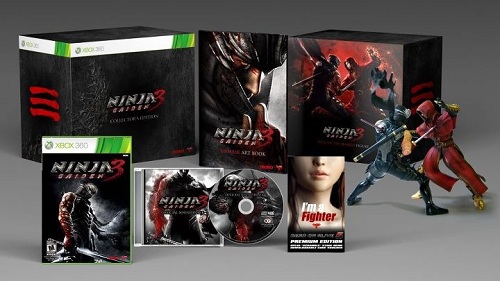 Some time ago Tecmo Koei announced that they would be releasing a special Collector’s Edition for their upcoming title Ninja Gaiden 3. At that time however they did not have any image to show what fans could be expecting if they were to put the extra money down on a purchase. Today however they have revealed the above image which shows us just what fans will receive.

It is worth noting now that the Collector’s Edition itself is only going to be available at GameStop, or EB Games in Australia, for an undisclosed reason and will be set at $99.99 in North America to the collector’s edition at this time. Still, fans can expect to receive everything seen above when the title is released on March 20th. This includes the game itself, an “Unmask” art book, a soundtrack CD, figurine, and a premium Dead or Alive 5 demo code with Hayate, Ryu, Ayane and Hitomi unlocked.