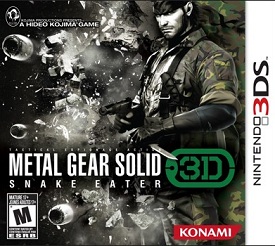 While many people have played Metal Gear Solid: Snake Eater back when it was on the PLayStation 2, none of them had the chance to play it in 3D. Thankfully they will now soon have that chance as the long announced Metal Gear Solid: Snake Eater 3D will finally be making its way to store shelves on February 21st in North America and March 8th in Europe, Japan and Australia, which is quite interesting as most Metal Gear titles are released in Japan before the West, not the other way around.

A number of new features have been added to Snake Eater 3D such as a photocamouflage system that allows the player to change the color of Snake’s clothes to a picture you take with your camera. Also it will make use of the gyro control system on the 3DS, the 3D feature and will make use of the Circle Pad Pro attachment to make controlling the camera easier.