I’m usually pretty slow to get into things. I’ll dip my toe in, take a few tentative steps and test the water, but if I’m not grabbed soon enough, I’ll get out of the proverbial (or literal) pool, dry off and go find something else.

In the case of indie games, I fell asleep in a chair next to the pool, and woke up to find I’d fallen in somehow. And I liked it.

Clumsy analogies aside, I should have seen my sudden fascination with indie games coming: last year, I sunk a total of three hours into Dead Island, five into Deus Ex: Human Revolution, but Edmund McMillen’s side project, The Binding of Isaac, kept me going for more than 45 hours. 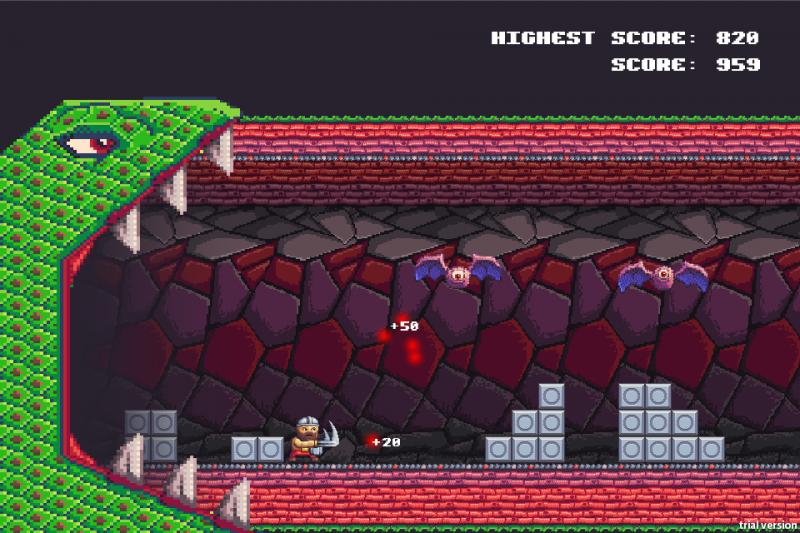 Also going for more than 45 hours was this weekend’s Game Jam, a worldwide gathering of indie game devs who volunteer to be locked up for two days and powerhouse their way through the game development process. On Sunday, I went along to check out the unanimously-impressive fruits of the Melbourne chapter’s intensive labour.

Run by the Independent Game Developers Association, and taking place across 48 countries simultaneously, the Global Game Jam gives indie developers of all levels a chance to display their talents to the world. Participants are tasked with prototyping a game from scratch within 48 hours, built around a common theme. The Melbourne event saw 107 Jammers create 27 games over the weekend, at La Trobe University in Bundoora. 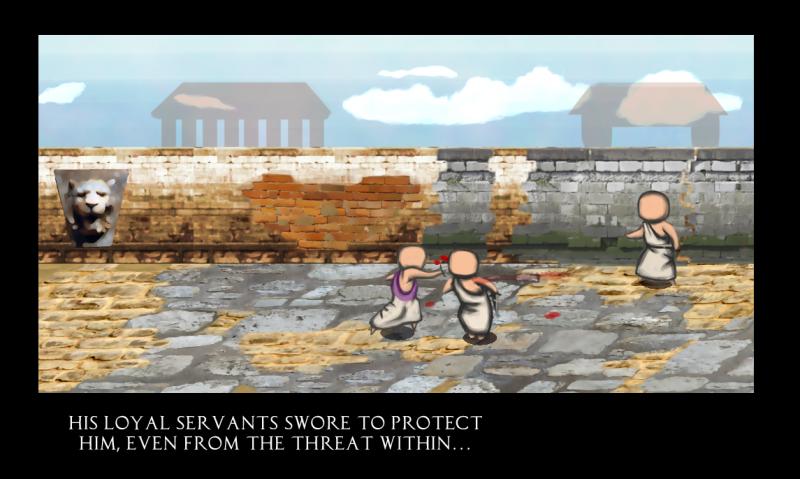 Feeling guilty for being well-rested, I arrived on Sunday afternoon to an atmosphere of post-deadline calm. The only evidence of the sugar and caffeine-fuelled chaos that I assume preceded the 3pm cutoff was the energy drink cans scattered around, the wearily proud looks on the faces of many a Jammer, and of course, the quality of the games themselves. I found myself pleasantly surprised at their level of polish, and the enduring good nature of the participants. I mean, I get the grumps after a single sleepless night.

But doing something you’re proud of can turn the sourest of moods around. Despite the condensed development time, the teams had plenty of reason to be proud of their creations – the old adage that diamonds are formed under pressure holds true.

This year’s theme was presented to the teams on Friday as this single image. 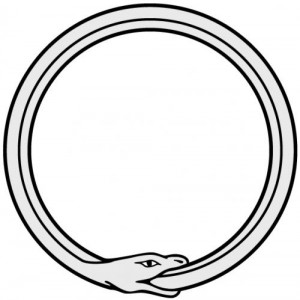 For those not in the know (including myself), this is an Ouroboros, an ancient symbol which signifies the cycle of life, death, and rebirth. So loaded with meaning is the symbol that it spawned games about phoenixes, zombie cows, bacteria fighting their way up the food chain and isometric shapes looking for love.

The interpretations of the theme were as diverse as the gameplay styles they were applied to. Whether you’re chasing an ever-higher score as a literal rolled-up snake, finding a suitable location to lay eggs as a platforming chicken, shanking ancient Roman Emperors in a side-scrolling brawler, or protecting baby turtles from dragons in a type of sliding puzzle game, there was no shortage of ingenious designs within the same confines.

Wondering how that simple image of a serpent eating its own tail could trigger so many wildly different games, I sat a couple of teams down and probed their sleep-deprived minds for some insight.

Team member Jayelinda said that thinking about the consequences of animals eating their own kind led to a game about the notorious Mad Cow Disease – a result of cows being fed other cows. 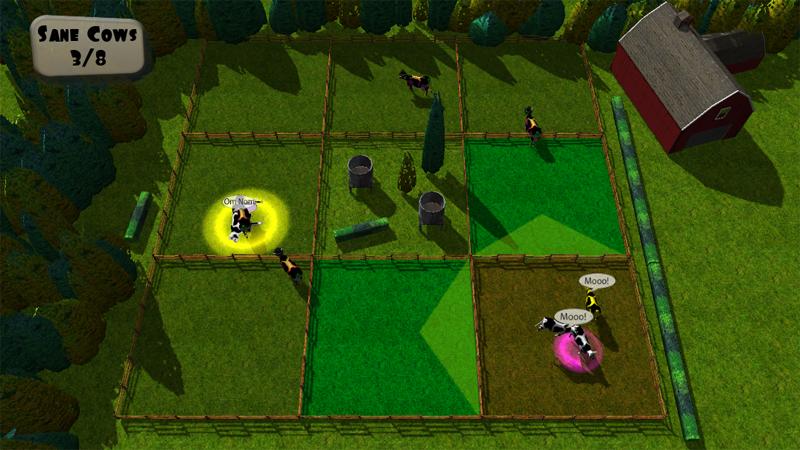 In their game, aptly titled Mad Cows, players must click and drag healthy cows out of the way of the zombified mad cows looking to feast on them. Rubbing two cows against each other produces offspring, with the aim of reaching a target population of healthy cows.

Cruelly entertaining is the fact that the most effective strategy for keeping the mad cows at bay is to regularly throw them a sacrifice, while your herd busily breeds in another paddock. It’s suitably zany, and even at this early stage exhibits a scalable model that could conceivably expand into a downloadable, arcade-style game for platforms like Steam or XBLA. 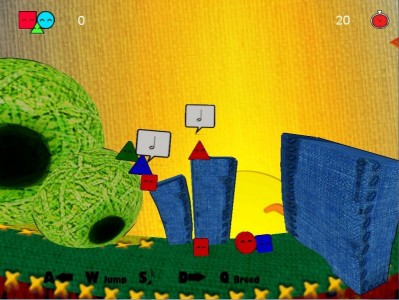 Pursuing a more peaceful meaning of the same symbol, the game Soul Mate puts players in charge of that most basic of urges – the urge to find a mate. Characters in-game are shaped as squares, circles or triangles; coloured red, blue or green; and have one of three mating calls. As a character made up of these traits, players must find their perfect match amongst the other basic shapes out there, which you will have one trait in common with and two differences – after all, opposites attract. Finding your mate will extend your lineage, as you play as the child, whom you then have to find a mate for. Each generation, you have thirty seconds before your biological clock expires.

Soul Mate offers a quite complete interpretation of the Ouroboros: there’s the symbolic aspect of the cycle of life, but a more literal manifestation can be found in the level design – the game takes place inside a slowly-rotating, circular landscape, with environmental assets that indicate a day/night cycle.

With a theme based on cycles, it’s not surprising that the most famous of endless cycles – the “chicken and the egg” conundrum – raises its head. Omelette Boris tackles this with finesse, and its polish as a platformer/puzzle game led to it being voted Best Game of the Melbourne Jam by the panel of judges. 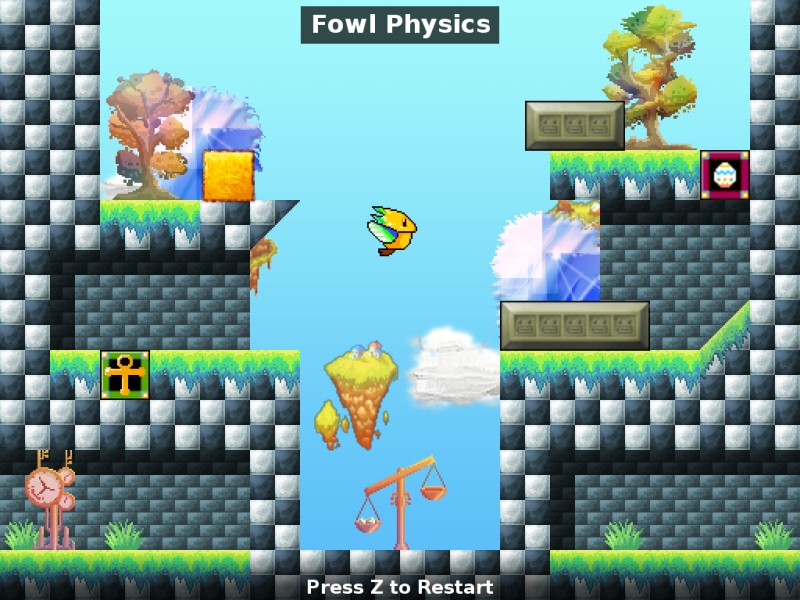 The game casts players as a chicken aiming to reach the perfect spot to lay her egg, which you then must guide safely back to the starting location. It’s not as easy as it sounds though. As the chicken, players must first set up a safe path for the egg, which can only roll around, and can’t fall very far without breaking.

Using similar ideas of spawning young, the game Hatch turns offspring into obstacles. As a turtle, players must move around a grid and throw eggs at dragons to clear the level. Each egg thrown spawns a new turtle, which follows the movements of the parent. The puzzle comes from working out how to maneuver around while protecting all the young at once.

Impressed with how far apart the final products branched from such a simple initial concept, I enquired with the team behind Hatch about how they developed their idea into a workable game in such a short time frame. Team member Sam says they played “Idea Ball”: throwing a ball around a circle, with whoever holding it pitching (quite literally) a basic idea, before passing it on. Then comes the task of narrowing it down to a few achievable concepts, and by Saturday morning – about fifteen hours into the Jam – have a basic prototype on which to iterate. 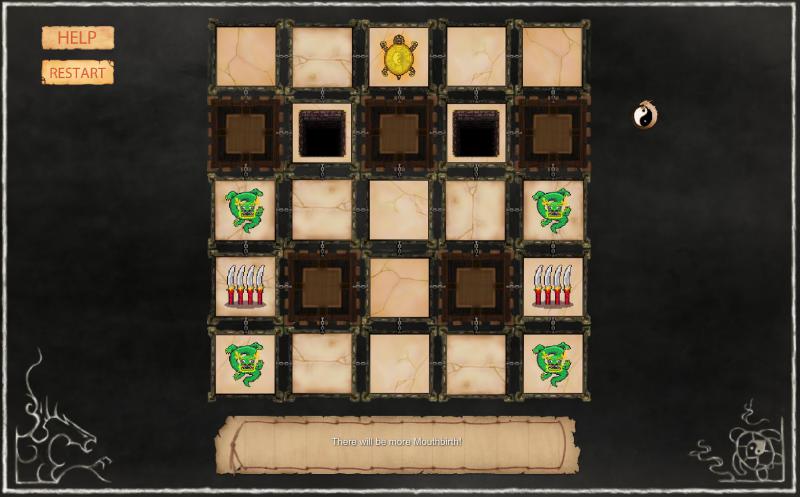 To prepare for such an intense working environment, the group held a couple of practice Jams of their own, with around fifteen of the Game Jam participants. Those fifteen branched into several projects during the Jam, including Hatch, and an underwater shooter called Aqua Battle.

The “kill or be killed” mentality of the fight to climb the food chain was the basis for Aqua Battle, which its creators call “an evolutionary shooter”. As a microscopic organism, you swim around an open environment killing fellow life-forms for dominance of the little pond. Interestingly, your health/progress is measured by your creature’s size – a kill will make you grow, while taking damage shrinks you.

The large team behind the two games won the award for Best Teamwork – not surprising, when they all insist the Jam is far more of a collaborative effort than a competitive one. Derek, working on Aqua Battle, says that during the first few hours there’s an air of secrecy over the projects, but once everyone is off and running with their own ideas, there is nothing to be gained from guarding the prototypes. Everyone has their own specialties, and sharing skills and knowledge between teams is encouraged.

It may be structured like a competition, but ultimately, the goal is collaboration. The real point of the Global Game Jam is to practice and demonstrate your skills, network with other professionals, indies and enthusiasts of the field, and while it sounds like a cliché, just have fun!

Find out what the IGDA is up to here.

And be sure to check out the Game Jam entries, free to download and play. They’re worth a look.