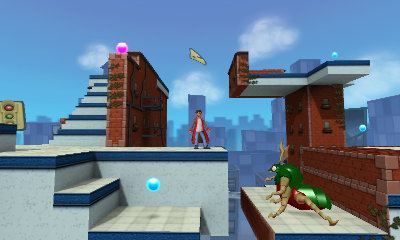 If you haven’t heard of CRUSH3D before, then the title of this game is probably a bit puzzling. That’s all well and good, because that’s generally the idea. An inventive dimension squashing puzzler from SEGA, CRUSH3D sees players help Danny find his marbles by ‘crushing’ between 2D and 3D worlds. If the idea is familiar then you’re probably remembering the PSP title Crush, which worked with the same gameplay concept but  had a much darker tone thanks to it’s insomnia suffering teenage protagonist.

To mark CRUSH3D’s launch on the Nintendo 3DS SEGA have just released a new trailer for the game which you can catch below, so make sure and have a look to see some of that ‘crushing’ in action.