Steven Spielberg: “I think that the greatest thing about this medium is it stays in a constant state of fluidity. When I make a live action movie and I wrap the movie, I am left with the reminiscence of what inspired me, what ideas the actors contributed and it all happens in a couple of months, three or four months. You go home with your assets and your love for these assets. They always say a movie can be made or broken in the cutting room and I really believe that too but I only had the assets to be able to be clever, if the scene didn’t work I would go in and re-cut the scene or cut the scene out of the picture totally. But it was a sort of closed system.

This medium allows you to continue telling your story, refining, creating shots close to release. I could do a shot today, I could do a shot a month from now and that shot be preformed, rendered, resolved and make it to the final cut of the movie before it’s released. So because this stays so fluid, it is so exciting to get an idea maybe two years after the initial performance production was behind us and be able to actually shoot a whole new series of scenes and make them fit into the current cut.”

Peter Jackson: “You know when you’re making a live action movie, you shoot your footage and then you get used to that very quickly. In the case of the films that I usually make, you have sometimes upwards of 18 months to 2 years of post production and you get used to seeing the same performances because very early in the process you’ve chosen the best takes and from then on its refining, making trims and tweaks and doing whatever you’re doing during post production. But in a way you’re looking at the same material over and over again. But one of the things with this project, which is always exciting, was that everything evolves continuously. This movie has taken us upwards of six years to get to this point from the very first discussions.

The difficulty with this film is the same difficulties with any movie, the script. I just remember the script and getting the script right and getting it to the point where we were happy, it was no different to a live action film.”

Q: How do you guys work together? Did you have disagreements and how did you approach them?

Peter Jackson – “Well I don’t remember having any disagreements particularly. I just relate it to doing a crossword puzzle with a friend. You sit there and you try and solve the puzzle together. It is not competitive, it is not who comes up with the answers first, there’s no ego it’s just how do you make the movie as good as it can possibly be? Steven and I used to get together and sit there and try and figure out the answers.”

Steven Spielberg: “I think Peter and I are such fans of Tintin, so once you agree on that it is all collaboration. There is problem solving but the ego doesn’t get in the way of that. We both came from two different continents but with one heart where Tintin was concerned. So there was never a moment in this whole process where it was ever a clash of ideologies or egos. It always had to be – how do we make this? How do we make this a better story? I don’t think we ever had one argument on this movie.” 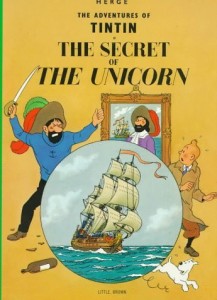 Q: What about making this particular Tintin story, why did you choose it?

Peter Jackson: “The initial decision was really based on a couple of things. For the first Tintin movie, we wanted Haddock and Tintin to meet for the first time. The story that features that moment is obviously The Crab with the Golden Claws. So, we looked at that book and we didn’t feel the first movie was there. So The Secret of the Unicorn was one that appealed in a sense that it was very much an adventure and mystery. And the great thing with The Secret of the Unicorn is that it goes into Haddocks ancestry; it goes into where his family came from. The story to some degree revolves around that. So we thought that was a natural thing to actually have Haddock enters Tintin’s life and the film and then adding to make his story the sort of focus of the film.”

Q: How much social commentary is in the movie and what can you tell us about the issues that are raised in what is a family film?

Peter Jackson: “Well The Secret of the Unicorn was a story that is much more of a straight adventure because it was written when Belgium was under German occupation during World War II and the Nazis didn’t want Hergé to have much political satire. So, even though there is a lot in some of his other stories this particular story is much more of a straight forward mystery and action story. The way that I see Tintin, especially with the supporting characters like Thomson and Thompson is Hergé is sending up a lot of bureaucratic authority figures. They are probably policemen or government bureaucratics that he butted heads with and now he’s setting them up. They’re people that we recognise in our own lives and yet he’s sort of making fun of them. So certainly there is a lot of gentle character humour.”

Q: In a movie landscape that is dominated by several established franchises like Pirates of the Caribbean and Transformers, why is Tintin going to speak to audiences today?

Steven Spielberg: “When I get excited about a project, I don’t do a market survey to see what the feasibility is for success based on popularity. I just look for a story that appeals to me. I don’t ever expect everything to be successful and I didn’t expect any of my movies actually that weren’t based on huge books to really ever be successful. I just made a movie the best I knew how. I put myself in that seat right there and made a movie for the audience or at least that part of me that is the audience and sometimes in movies, without the audience in mind at all. It’s a ‘Hail Mary’ with every single concept these days, you just throw it into the air and hope that there is an audience that is going to understand and appreciate what you’ve done or be entertained by it. You just never know. I face this question on every single new movie that was an unknown commodity until it was discovered by audiences. I think Tintin falls in that same category. Internationally it is very well known, in America nobody knows Tintin.”

Q: Can you talk to us about the casting process for Tintin?

Peter Jackson: “I’ve worked with Jamie (Bell) on King Kong and so he struck me as being quite Tintin like and he is like that in real life. He’s a decent guy with a great sense of humour, a dogged determination and tries his very best with everything he does. Those are essential Tintin qualities and Jamie has those. So to me, I thought he would be a really interesting choice and spoke to Steven about that.”

Steven Spielberg: “I’ve had some good experiences with Daniel (Craig) and he became a really close friend of mine personally. We were having a beer one day and I mentioned a movie I was starting called Tintin and I said ‘wow you would be great for Sakharine’ and he said ‘who’s that?’ He knew Tintin, he was very familiar with the series but didn’t quite know about the character. So we talked about it and he thought it would be exciting to try something new, he had never done anything like this before. He thought this would be a fun learning experience for him and it turned out to be. Simon Pegg and Nick Frost – they’re basically twins in real life.”

Peter Jackson: “Two halves of the same brain. Don’t think for a second that Andy (Serkis) was in there because he is a friend of ours. Andy is a great Captain Haddock, it would be hard to find or think of somebody that could actually do as interestingly a job with that character and the manic energy and the kind of messy sort of qualities that character has. I knew that Andy would know exactly what to do with that guy. Andy obviously has a lot of experience with motion capture but Jamie, Daniel, Nick (Frost) and Simon (Pegg)hadn’t, just about every other actor in here hadn’t. So it’s not important. The thing with motion capture is your putting the suit on but ultimately you have to act and your acting becomes the thing that drives the animation in the film. But there’s no particular technique involved, it is just that you want to find the best people to play those roles just like your casting a normal movie.

The one bit of freedom that you have is if you’re casting a live action film the physical appearance of a person becomes an important thing. If you wanted someone who is in their early 20s you can’t cast someone who is in their 40s for instance. Or if you’re wanting to cast Winston Churchill you can’t cast a skinny little guy. So often when your casting physicality becomes a very important thing and is always the first place you go and then you look at the best actors who fit that brief. With motion capture the wonderful thing is that it gives you complete freedom. You’re literally looking for someone who is going inhabit the character, it doesn’t really matter at all what they look like.”

The Adventures of Tintin: The Secret of the Unicorn comes to theatres on December 26, 2011. Check out our review HERE. What do you guys reckon? Are you going to catch it when it comes out in cinemas?

Hands On: Gameloft’s The Adventures Of Tintin