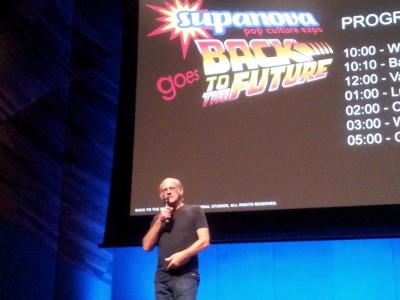 Saturday, November 12, 1955: Doc Brown sets up an elaborate “weather experiment” at the Hill Valley Town Hall, to send 1.21 Gigawatts of electricity roaring into an invention that he won’t invent for nearly thirty years, to send his friend Marty, who hasn’t been born yet, back to the future.

Fellow Capsule editor Luke Merritt and I were in attendance at the special Supanova event in Melbourne, after Christopher Lloyd had to postpone his appearance at the regular event back in April.

The event kicked off with a screening of the first Back to the Future, after an introduction by Lloyd. I’ve seen the movie a hundred times, but it’s such a classic example of great storytelling, heart and humour that another viewing was a pleasure. Especially on the big screen, in Blu-Ray, in what were possibly the comfiest auditorium seats I’ve ever parked my backside in.

Before the movie started, Lloyd asked if this was the first time anyone in the audience was seeing it. Unsurprisingly, not a single hand went up. I suppose there was a chance that maybe someone had dragged a friend along to share the movie for the first time, but really, anyone who would go to the trouble of attending an event based around a movie is likely already a fan of said movie.

Anyway, as I said, another viewing was a pleasure. One thing in particular that I noticed this time around was how faithful Telltale’s recent Back to the Future game was in regards to the property. I’ve been playing it a bit lately (two out of five episodes down, currently!) and noticed that, in particular, the iconic Town Square seems perfectly recreated in the game. The courthouse with the clock is the centrepiece, but there’s also the little park in front, the cinema behind it, the café/malt shop overlooking the park, even the shopfronts off to the right of the courthouse are all faithfully rendered and used well in-game. 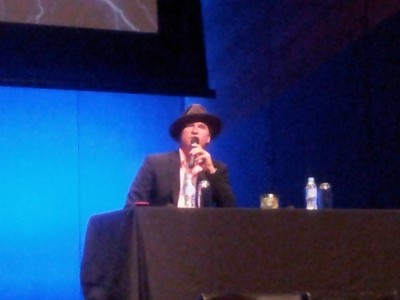 We stayed for the entire film, but a lot of people bailed to line up for photos. Which I guess was the smart thing to do – you didn’t want to be lining up during the Q&A session with Val Kilmer, who came out afterwards. He may not have been the focus of the event, having bugger all to do with Back to the Future, but he was quite entertaining regardless.

The only thing I’d seen him in recently was playing the villain Von Cunth in MacGruber, the parody of MacGyver by the Saturday Night Live/Lonely Island gang. There still seemed to be a decent gathering of his fans present, and his tendency to digress onto unrelated but entertaining stories made his session run over into lunch.

Our friend Doc Braun, the guy who built his own drivable Delorean (read our interview with him from Armageddon!) was parked outside, showing off his pride and joy to fellow fans. I spoke to him briefly, and he was ecstatic that he’d attracted the attention of the man he was initially inspired by. Lloyd himself had come by earlier and had a chat, had some photos taken and praised Braun’s faithful recreation. Knowing how hard ol’ Doc Braun has worked on his passion, and how genuinely nice a guy he is, it was fantastic to hear that his dream had finally come true. 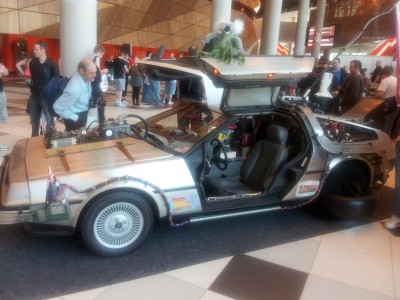 When we got back to our seats, out came the man himself. The crowd’s reaction to Lloyd’s presence was insane! In a good way, of course. Seeing someone in person that you’ve only seen on screen is a thrill, especially when it’s someone you feel you’ve grown up with. The audience’s enthusiasm was nothing short of amazing, considering the film that everyone was most excited about is twenty-six years old.

This enthusiasm manifested itself most prominently in the questions that fans were burning to ask. I’m sure he’s answered them all in the past 26 years, but he fielded them all with gentle humour, understanding and acceptance.

Some invoked genuinely interesting stories about the film’s production. For instance, Eric Stoltz was the original actor for the part of Marty McFly, but was swapped with Michael J. Fox once he became available. In fact, the experiment scenes in the mall parking lot at night had already been shot with Stoltz as Marty, before the switch. The producers thought Fox brought a light-hearted, humourous energy to the role, and as such McFly and Fox are inseparable in the fans’ minds.

The script underwent some key changes, as they so often do, and had they gone ahead with the original ideas, the film may not have been as fondly remembered. Firstly, the Delorean was not the form the original time machine took. Apparently, and a regular old refrigerator was how Marty and the Doc would move through time. No getting it to 88mph, just climb in the fridge and bam!…. Not quite the same. 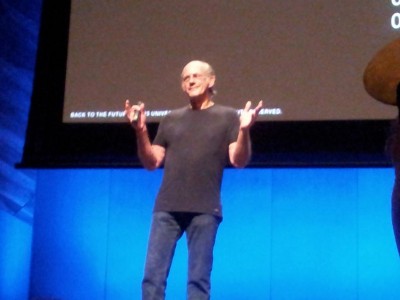 Doc’s beloved dog Einstein was to be a chimpanzee in one draft, and instead of channelling lightning from the historic thunderstorm, the 1.21 gigawatts of power required to send Marty back to the future was to be absorbed from a nuclear test strike in Nevada. That would have raised all kinds of unwanted issues, Lloyd said, as well as drawing away from the close character narrative that the film so expertly weaves.

But while some questions led to fascinating insights into the franchise, others seemed to be just wanting to mention their favourite movies of his, resulting in a lot of questions along the lines of “How was it working on such and such?” with nowhere for Lloyd (or Kilmer earlier, for that matter) to go, besides awkward “yeah, it was fun” answers.

I haven’t been to many of these Q&A sessions, but I have noticed that these kinds of questions pop up regularly. While it may be somewhat frustrating for the stars to field these at every event, they handled them professionally, understanding that fans are getting a thrill just talking to their heroes.

And who wouldn’t get a thrill meeting someone as memorable and well-loved as Christopher Lloyd? His portrayal of eccentric, lovable characters, most notably Doc Brown, is a part of many childhoods of the 80s and 90s (including my own), and his gentle and almost ironically subdued personality, given the characters he’s known for, only adds to the charm. 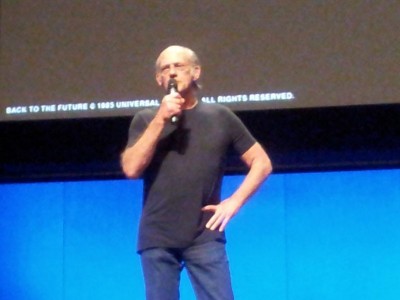 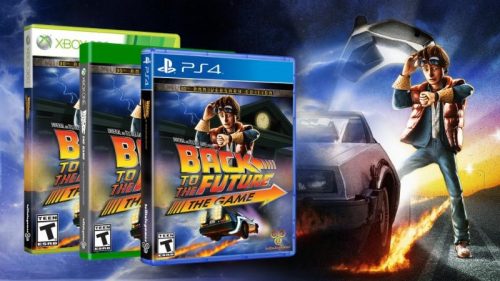