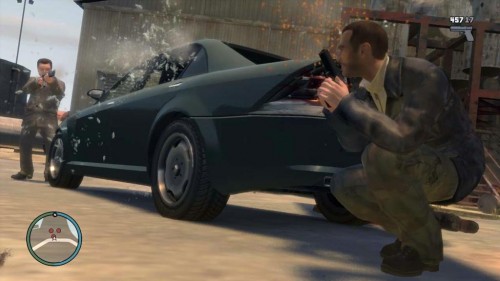 A news report that has aired on 7 news on the 3rd of November has claimed that, even though he does support a R18+ rating in Australia, New South Wales Attorney General Greg Smith has called for a ban of video games like Grand Theft Auto, citing reasons such as violence and sexual content. The report also claims that England and Norway already ban games like this as well as linking the July massacre in Norway to violence in video games, despite evidence that there are other factors that would have been more significant, like a manifesto revealing his extremist side.

This is very misleading by Channel Seven. Both England and Norway do have 18+ ratings in place and allow games like Grand Theft Auto to be sold on store shelves. The report also refers to the ‘Hot Coffee’ controversy of Grand Theft Auto: San Andreas. However, the game is seven years old and the controversy was only raised due to an unofficial modification rather than official means, meaning that regular players would have no access to this mini game.

The position of the Attorney General is convoluted. The idea of having a R18+ rating is to allow the intended audience still have the freedom to purchase games that are meant for them and to inform parents that a certain game is inappropriate for their children, something that is juxtapose by the report by placing young children in front of a inappropriate game for said children. Claiming that games such as Grand Theft Auto should be ban while still supporting the R18+ rating will defeat the purpose of said rating. Fortunately, a spokesperson from the Attorney General’s office did clarify the comment made via IGN.

The issue of Refused Classification was in fact discussed at ‘The Politics of Play’ public debate last Thursday at GAME, held at Macquarie University. The guidelines of the RC category (yes, they do have guidelines) must fit in such a way that it offends society in general. Games like Grand Theft Auto and Saints Row: The Third may contain elements within the game to offend to some but not to the majority, which means it does not warrant a RC rating.

In terms of the report, it is ill-research and provides an unbalance point of view, skewing the average viewer to an ill-advised perspective. The use of a game scene inaccessible to the average gamer (and also raises questions about their knowledge of said fact), the irresponsible staged scene of young children playing a game which has been clearly classified for an older age group and suggesting that video games are to blame for a horrific event shows how far the traditional forms of media shall sensationalize video games and use them as an easy scapegoat.

[UPDATE]: The Interactive Gaming and Entertainment Association has responded to the report in a letter sent to Peter Meakin, CEO of Channel 7, backing the points I have made in the article above. For the letter, follow this link.

The Witcher 2 censored a bit in Australia