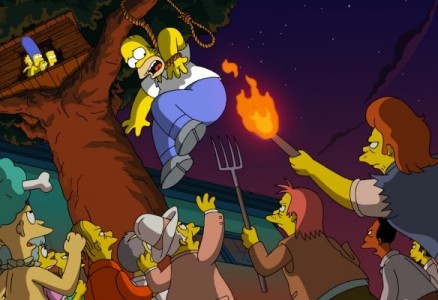 With its 23rd season now airing in the US, the end of The Simpsons has appeared due for years, but now looks like it may happen in the worst of ways: a pay dispute.

Every few years,  Fox Studios, who produce the show, and the voice actors, who bring the population of Springfield to life, battle it out over the actors’ pay. Threats are usually thrown around, as Fox mention how they can simply replace them with soundalikes, apparently unaware how quickly the show would fail if they did so.

But now, Fox have stated that the show is too expensive to produce “under its current financial model”.

Last week the actors proposed a 30% pay cut, in return for a small percentage of the merchandising and syndication income, which the studio collects almost entirely. The execs refused, offered a 45% pay cut with no back-end earnings, and underlined it with the dire warning that if they don’t accept, the plug will be pulled on the show.

When new episodes stop being produced, the cast’s salaries (which currently stand at about $US8 million per year apiece) simply cease, with little income from reruns. Trying to claim a piece of the gigantic merchandise pie is a wise move, securing an income when The Simpsons ends its record-breaking run. But an insider told The Daily Beast that Fox Studios believe they have the upper hand.

“They’ll continue to make a ton of money (after the show ends). They’re free to sell it to cable and a second round of syndication, and they figure that the cast has very little leverage.”

The Simpsons has been a staple of most nineties kids (and adults, for that matter) their whole lives, has spawned merchandise of absolutely everything under the sun (I have Simpsons guitar picks, shoelaces, and a doorbell among my collection), and is seen pretty much every night of the week, every week, here in Australia, with similar syndication around the world.

We already know Fox seems to like cutting popular shows down in their prime – Futurama and Family Guy spent years in limbo before being revived due to fan demand and crazy DVD sales figures. But few would argue that The Simpsons is still in its prime.

Maybe the show is due to end. Many would argue it’s well overdue. As a loyal Simpsons fan, I’m undecided. But if its twenty-three year run is due to close, the show must be given a proper finale. You cannot simply end the pop culture juggernaut that is The Simpsons with a standard episode – the creators must wrap it up creatively. This could be the biggest television finale of our times.

I know I’ll be keeping an eye on news relating to this. What are your thoughts? Should The Simpsons go out with a bang, or just get out?