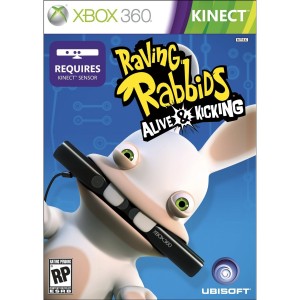 The Rabbids have officially initiated the second part of their invasion plan! Not only are they getting us to do stuff in our lounge room that’s going to make us look ridiculous to our neighbours, they’re going to make us do it in four-person groups!

Unlike previous Rabbids games it looks like this one’s going to require a team effort to pass some of the levels, hiding, guiding through an ice tunnel (what are we guiding? I don’t know. Why? I don’t know. Just do the damn thing!) creeping across the screen at the right pace, and contorting all of your bodies to make a shape.

Some of these games will probably have a little bit of leeway, especially considering there’s always that one guy who wants to wreck it for everyone else…

Check out the multiplayer trailer below. What do you guys reckon? Is this going to add to the fun or add to your want to kick someone in the ass when they stuff it up?

Raving Rabbids Alive and Kicking is coming out for the Xbox 360 Kinect on November 1 for US and November 3 for Aussies.