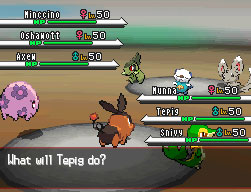 We have heard reports in the past that the 5th Generation of Pokemon titles (Black & White) would not have the usual third installment this time around, but a new domain registration looks to prove those statements as false. “Pokemongray.com” has now been registered by Melbourne IT Digital Brand Services, who are the same group that set-up Nintendo’s websites for Black and White.

As of now this is just a rumor, but considering the evidence, I would say there is a great chance we could see a “Gray” version put out. The speculation however would come in on what handheld this would be released for, as the 3DS will more than likely be chosen to host this third entry into the generation’s Pokemon line. Now we can just wait and see what pops up at this link sometime in the future.